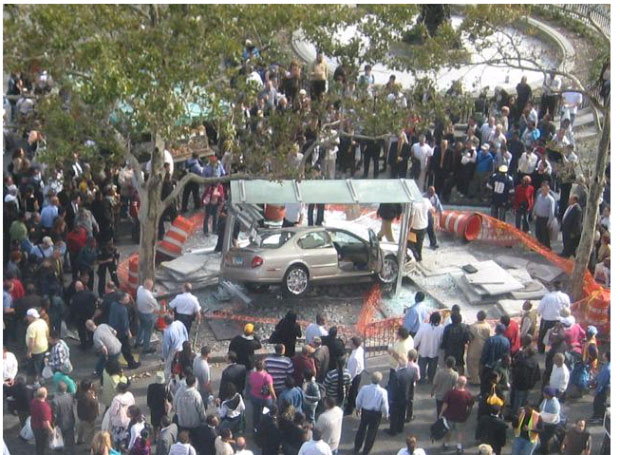 Yesterday afternoon, a woman drove her car into a bus shelter in Brooklyn. Luckily the bus shelter was just completed or else there could have been even more injuries than the five that were reported. WABC 7 reported that the driver was double parked when another car needed to get by. The second car's driver "sat on his horn until the woman in the Maxima moved from the passenger seat and got behind the wheel."

The Maxima's driver may have gotten "flustered" and accelerated into the crosswalk, hitting two people, and then driving into the bus shelter, where three other were hit. The Sun says that driver has been identified as Paphany Bernette and other reports say she is not a licensed driver (she may only have a learner's permit). Bernette will likely face charges of reckless endangerment and vehicular assault.

Since the accident occurred in busy Cadman Plaza where the courts are, the Post reports that attorneys were on the scene handing out cards to victims. A court employee said, "It was disgraceful."

And double parking of passenger vehicles is illegal at all times (PDF) but there are some times when a commercial vehicle or truck can double park.

#brooklyn
#bus
#cadman plaza
#court
#News: NYC
#parking
#people
#the sun
#wabc
#wnbc
Do you know the scoop? Comment below or Send us a Tip
A new Gothamist is coming! We’ve moved comments over to our beta site. Click here to join the conversation and get a preview of our new website.