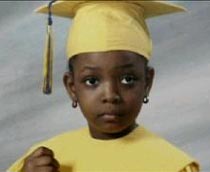 A 6-year-old girl was killed after a car struck her while she was playing in an open fire hydrant last night. A witness said, "She was running across the street, and the car just hit her, and it dragged her up the street."

Police were going through eyewitnesses accounts about what vehicle hit Mimah Bangoura: Some say it was a minivan that fled East 166th Street between Sherman and Sheridan Avenues, while others say it was a livery cab driver. Witnesses say the driver's (or drivers') vision could have been impaired by the water when it hit the windshield.

The livery cab driver, Yaro Dramane, took the child to the hospital, where she died. He was questioned and is currently charged with driving without a license. The police are still investigation the incident, and Boubacar Bangoura, the child's father, tearfully said, "I'm going to miss her so much. If you drive and you know that there are kids around, please drive safe."

#bronx
#open fire hydrant
#pedestrian fatality
Do you know the scoop? Comment below or Send us a Tip