As Hillary Clinton was winning the final democratic primary in Washington, D.C. and Donald Trump was spinning the Orlando massacre for his own personal gain, a third-party candidate was busy receiving endorsements from the nation's biggest pro-marijuana legalization group and making the rounds to promote his own bid for the White House. Former Republican New Mexico governor Gary Johnson is the Libertarian party's presidential candidate, and has gotten the most press for his open use of marijuana and support for legalization (his stances on other issues range from opposing single-payer healthcare to supporting a ban on late-term abortion and calling for an end to the death penalty). And though you probably haven't heard much about him, he really thinks he can win.

"If you want to hear something really shocking, I might actually be the next president of the United States," Johnson declared last week, speaking at the second annual Cannabis World Congress & Business Expo. Describing Clinton and Trump as polarizing figures, he made the case for his third-party candidacy, reminding his 420-friendly audience that he's "still the highest elected official in the United States to call for the legalization of marijuana, although Bernie Sanders apparently rolled out of bed, hit his head, and has been doing the same...amazing, in this country, 56% of Americans now support legalizing marijuana and not one elected official at the gubernatorial, congressional, or senatorial level supports legalizing marijuana. I cannot think of a bigger disconnect that exists in American politics today."

Johnson was one of myriad people who took the convention as an opportunity to call for the total legalization of marijuana nationwide. Held in New York City, the convention thrust this state's laws regarding cannabis use under a stark light: though technically decriminalized, marijuana isn't legal for recreational use, and medical marijuana is approved for only a handful of conditions.

Accordingly, any products at the convention that contained THC—a cannabinoid that produces the high typically associated with marijuana—were sealed beneath glass, and most exhibitors hawked legal products containing CBD, another cannabinoid that doesn't have any psychoactive properties but is believed by many to help other conditions, such as epilepsy and autism. 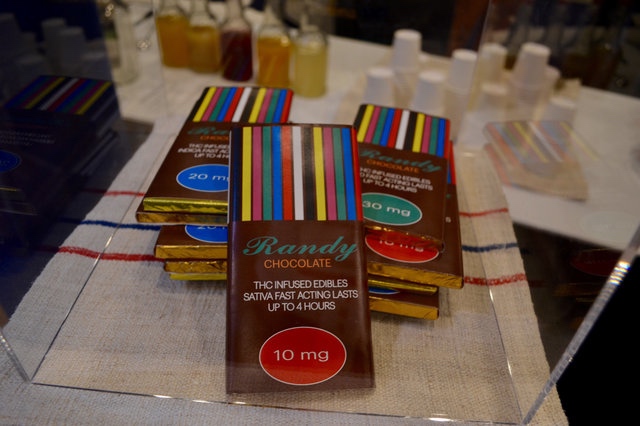 Edibles under glass at the Cannabis Convention. (Miranda Katz / Gothamist)

Also blatantly apparent at last week's convention was the homogeneity of the predominately white attendees, panelists, and exhibitors. As the legal marijuana industry expands, it has been leaving out people of color, who are much more likely to have been arrested for marijuana use: though there aren't any official statistics on race and cannabis business ownership, Buzzfeed found while conducting interviews for a lengthy feature on the matter that about 1% of storefront marijuana dispensaries in the U.S. are owned by black people.

Johnson didn't go so far as to address the industry's diversity problem, saying only that there are "tens of millions of Americans who are convicted felons that but for our drug laws would otherwise be law-abiding, tax-paying citizens."

But others at the convention were eager to address the detrimental effect that the War on Drugs has had on communities of color in the U.S. Speaking on a panel about action toward legalization of marijuana on the East Coast, the Drug Policy Alliance's Bill Piper framed the matter as a civil rights issue, calling for institutional change.

"If you look just here in New York City for instance, young whites use marijuana at higher rates than blacks and Latinos, but 85% of the arrests for marijuana possession are of blacks and Latinos," Piper said. "The war on marijuana is rolling back the gains of the civil rights movement—it's not a coincidence that the War on Drugs began at the same time the civil rights movement began to make major gains. The war on marijuana is a real war. The police kick down doors, raid people's homes, point machine guns at children, shoot pets...this is a real war and it's being disproportionately fought for decades in communities of color."

Piper also noted that despite the legal marijuana industry's current boom, it's excluding anyone who's previously been convicted of illegal possession or sale of the drug—perhaps one reason that the industry is currently so homogenous.

"A lot of states prohibit people with convictions from getting marijuana, so they're barred from working in the new industry," he said. "That puts an enormous burden on people in communities who have faced the War on Drugs for decades. There are a whole bunch of restrictions that make it really hard to get a license—in some states you have to put up $5000 in cash to get a license. That's discriminatory and arguably racist. We really need to level the playing field."

Coincidentally, on the same day as these calls for reform, New York's state assembly took one step toward redressing the harmful effects that the War on Drugs has had on the state's communities of color: a new bill would seal the criminal records of people unconstitutionally arrested for possession of marijuana in public view, which has not been a crime in the state since 1977 but nonetheless leads to frequent arrests, primarily of black and Latino people.

Assemblymember Crystal Peoples-Stokes, who introduced the bill, said that "drug laws have created a permanent underclass of people unable to find jobs after a conviction...Sealing low-level marijuana possession convictions is the first step to reintegrating thousands of New Yorkers who are inhibited daily from accessing employment, housing and an education all due to a conviction on their record for simple possession of marijuana." That bill has yet to make it through the state senate.

While some advocates at the Cannabis Expo called for blanket, full legalization, others emphasized the importance of maintaining a distinction between medical and recreational marijuana. Delivering the convention's keynote address, Keith Stroup, an attorney and founder of the National Organization for the Reform of Marijuana Laws, began his speech by saying that "I smoke pot, and I like it a lot," but went on to caution legalization activists to differentiate between the movements for medical and recreational weed.

"If you're sick and dying, if you have MS or AIDS or Parkinson's or any number of diseases that marijuana is helpful for, you deserve to be at the front of the line," he said. "We're fighting for the right to smoke marijuana like responsible adults, we're not fighting to pay a pot doc to pretend we're sick so the government will leave us alone...The answer moving forward is not to define medical use so broadly so that everyone who has a headache gets a recommendation. That cheapens medical marijuana for patients, and it doesn't win the basic right to smoke marijuana."

That argument earned Stroup several boos and walkouts from the crowd, but for others, the sentiment hit close to home.

"I am an oncology patient, and while science clearly does not change while you cross state lines, my ability to stay alive does," said Jenn Pedini, the deputy director of NORML's Virginia branch. "Of course I'm going to take that personally."

#cannabis
#cannabis convention
#drug policy
#marijuana
#marijuana legalization
#medical marijuana
#war on drugs
Do you know the scoop? Comment below or Send us a Tip
A new Gothamist is coming! We’ve moved comments over to our beta site. Click here to join the conversation and get a preview of our new website.