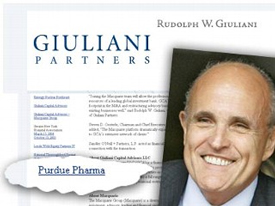 Rudy Giuliani's good financial fortune derived from the formation of Giuliani Partners is leading to political misfortune, as yet another piece of lucrative business he conducted in the private sector has come back to haunt his candidacy. Recently, his involvement with Purdue Pharma--the producers of the painkiller OxyContin--has come under scrutiny.

Giuliani is being accused of using his high profile in the wake of 9/11, his background as a federal prosecutor, and his personal reputation in order to run interference against law enforcement for a drug company that was paying him handsomely. The top executives of Purdue Pharma eventually pleaded guilty to criminal charges for insufficiently warning the public of the potential for abuse of its highly profitable product as a street drug, and the company paid more than $600 million in fines.

Giuliani apparently found it very profitable to straddle the divide between government and his client, meeting with Asa Hutchinson, who was then the head of the DEA, after the agency began an investigation into Purdue. He stressed his credibility on the issue of fighting drug abuse by mentioning that he had donated $15,000 to the funding of a traveling DEA museum. He also assured Hutchinson that he was sending one of his top associates to oversee security improvements at Purdue's plant in New Jersey. Giuliani sent Bernard Kerik, who has proved to be a continuing embarrassment to his campaign.

Earlier this year, The Washington Post reported that while Giuliani was attempting to politically protect his client as OxyContin abuse was becoming a growing problem, the Justice Department was paying his firm $1.1 million to conduct a management review of the department's organized crime drug task force. One of that task force's responsibilities was to stem the illegal trade in OxyContin as a recreational narcotic.