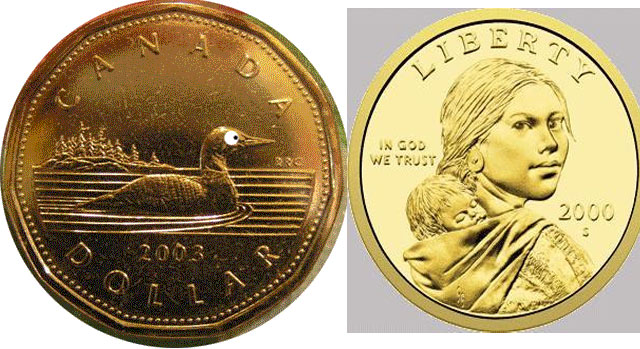 Our friends from the Great White North are feeling flush from the strengthening of the Canadian dollar versus its US counterpart, and New York is apparently ready to relieve them of their excess cash. The Loonie, or Canadian dollar, is even with the US dollar for the first time since 1976. If you've ever wondered why the backs of paperback books usually have a second, more expensive, price printed on them them for Canadians, it's not because we don't want our northern neighbors to read inexpensively. It's because the Canadian dollar has traditionally been weaker than the US dollar and the exchange rate necessitated dual pricing in North America.

The New York Post writes that NYC tourism officials are expecting an influx of Canadians with cash now that the two currencies are equal, making the States seem like a bargain. One student from Canada admitted that the prior inequality did have a psychological effect. "We [Canadians] have a complex. We love the States, but they overshadow us." An Ottawa resident told the Post ""Our economy is better than yours. I'm really proud of that."

While it may encourage more tourist dollars flowing into the city from Canada, we can think of a few downsides. Canadian hockey teams may be able to pony up more cash for good players and put the Rangers and the Islanders in a bind. Film crews substituting Vancouver and Toronto for NYC may migrate south, creating more congestion, one blocked-off street at a time. And Canadian comics will no longer be available at cut rate prices, but we imagine that's more of a problem for Chicago and LA. We just hope that vending machines will begin accepting Canadian coins, now that they're on par with US currency.