Can Willie Randolph Save His Job? 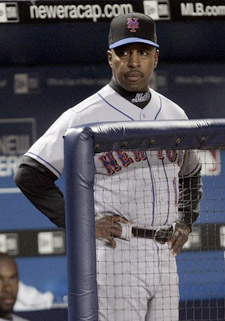 All signs point to this being a critical weekend for Willie Randolph if he wants to keep his job. Ownership is clearly peeved at him, refusing to return his apology phone call and having Omar Minaya do it. The fans are filling the talk radio airwaves with anti-Willie diatribes and the team is not playing well. In fact, they have essentially played .500 ball for over a season. If you go back to May 19th, 2007, the Mets were 28-14, since then they are 82-83. Clearly, this is a team that needs something to change because they are too talented to play at that mediocre level.

Part of Willie’s problems with the fans stem from the fact that he will never be perceived as anything more that a Yankee masquerading as a Met, but Willie has severely damaged himself this week with his comments and actions. Fans are right to wonder why Jerry Manuel got thrown out arguing the blown call on Delgado’s home run Sunday instead of Randolph. Why have Billy Wagner and David Wright both seemed to suggest in the past week that some of their teammates just don’t seem to care?

The whispers say that the Wilpons want to sit down with Willie when the team returns from Colorado Sunday night. The question is, what does the team have to do to save Willie’s job? One would think a sweep of the Rockies would save it while being swept would doom it, but what’s the middle ground? Have the distractions become so large that Omar and the Wilpons will just clean house? Stay tuned, it should be a wild weekend.

Photo of Willie Randolph on Tuesday by AP/John Bazemore