Can The Knicks Be Freed From James Dolan's Ownership? Let Us Count The Ways

Yes, the similarities between our current president and Knicks owner James Dolan (a massive Trump donor) are truly manifest. But whereas Donald Trump’s presidency will at some point come to an end (maybe), it’s quite possible James Dolan will remain the Knicks owner for the rest of our natural lives—despite every discernible signal that he hates being held even remotely accountable for their performance. The Knicks are wildly profitable and stand as leverage for Dolan to hold onto his prime real estate in midtown, which he currently pays a grand total of zero property taxes on thanks to a sweetheart deal from the state legislature.

This year has represented a new low—the Knicks have the worst record in the league and traded away Kristaps Porzingis, their most popular player in a generation for… wait for it…. salary cap space! After a fan requested during a game that Dolan “sell the team” Dolan had him booted from MSG and then concocted a conspiracy theory surrounding the event where he himself was the victim.

Is it possible that this season is the one that finally loosens the stranglehold that Dolan has on the Knicks? The state senator who represents all the blocks around MSG (but not MSG itself thanks to an Olympic-grade gerrymander) has once again threatened to do away with the company’s much-criticized tax break, and an upcoming fight with a city council bent on the arena relocating by the end of its current operating permit (in 2023) makes the idea of holding on to the Knicks (and for that matter, the Rangers, Dolan’s other sports property) that much less attractive.

With the Knicks a horrendous 46 games under .500, and Dolan taking to the airwaves to express his grievances about New York City’s hard-working sports reporters, how long can this keep up? When will the madness finally end? Here are four possible ways for Knicks fans to find some sort of salvation.

1. Dolan sells the team to a foreign billionaire or hedge fund or faceless insurance conglomerate

With that showdown with the council over the Garden’s operating permit looming (more on that later), and a team valuation at an all-time high, Dolan comes to a realization between the second and third encore of JD & The Straight Shots’ opening set for The Eagles (his band is tuning up for a cover of “Only The Good Die Young,” if you must ask): Music and concert venues are really his only love, and he can become even more filthy rich if he unloads his teams to the highest bidders.

The stock price for the Madison Square Garden Company shoots up as word leaks that Dolan is entertaining offers. And they’re truly staggering—we’re talking enough money to build himself at least ten other pleasure spheres. With billionaires and oligarchs of every stripe offering cash, College Exam Fixers, Inc., a Greenwich-based hedge fund, makes a late bid! The Post says Jared Kushner is interested in the Rangers! It’s a bonanza. But then reality sets in—who on earth would even have enough money to buy the Knicks, Rangers, and MSG? Each of them, on their own, represent either the most, or one of the most valuable brands in sports and entertainment. And how would it work if you tried to sell each asset off separately?

“The issue is this is a huge company,” Roger Noll, a Stanford professor emeritus who studies sports economics, told Gothamist. “The Madison Square Garden Corporation is so big, and the connection between the Garden and the two teams is beneficial to both because it eliminates the uncertainty of each that would arise from negotiating lease agreements if they were independent companies. That means you need to find someone who has five billion dollars plus to buy the whole schmiel, and that’s the problem.”

While Noll concedes that it’s not impossible to find a buyer with that type of money, the market would be thin, and possibly too thin for Dolan to create the type of competition needed to drive up the price. Either way, if he were to find a buyer, the transaction would have to take months or even years to get approval through both the NBA and NHL. (Odds 30-1)

2. The city buys the team

As previously mentioned, the city council is gearing up for a fight with Dolan over Madison Square Garden’s operating permit, which expires in 2023. Last time the operating permit expired in 2013, the council, in a 47-1 vote, told the Garden that it had ten years to move, and the permit would not be extended again. Five years have passed, and Dolan has done absolutely nothing to prepare for the arena’s disappearance. (And why would he? He just spent a billion dollars renovating it back in 2013.) Councilmembers desperately want the arena out of the way to clear space for the construction of a new Penn Station.

So, stuck with an arena owner more than content to throw up his hands in 2023 and appeal to Stephen A. Smith about “job-killing politicians wanting to evict the Knicks and Rangers,” the city draws a hard line with the reviled Dolan: No operating permit, no basketball. Flustered, Dolan threatens a move to New Jersey, only to see effigies of himself burned on 7th Avenue. Sensing that a court battle with the city won’t end favorably, and watching potential buyers balk at the exorbitant asking price, Dolan decides to sell the soon-homeless Knicks to the city, which itself is motivated to bring this charade to a quick conclusion. The city funds the purchase through either the sale of municipal or revenue bonds (after the state lifts the city’s bond limit in a special exemption), and has thirty years to at least break even on the purchase of the team. The operating permit is then extended another five years as construction gets underway on the new Madison Square Garden nearby (owned and partly paid for by James Dolan, of course, now flush with tax breaks that helped convince him to vacate the Garden even more than the purchase of his most valuable franchise).

Of course, we’re really in the realm of the unreal because the league would almost certainly never allow it. But crazier things have happened! (Odds 1000-1) 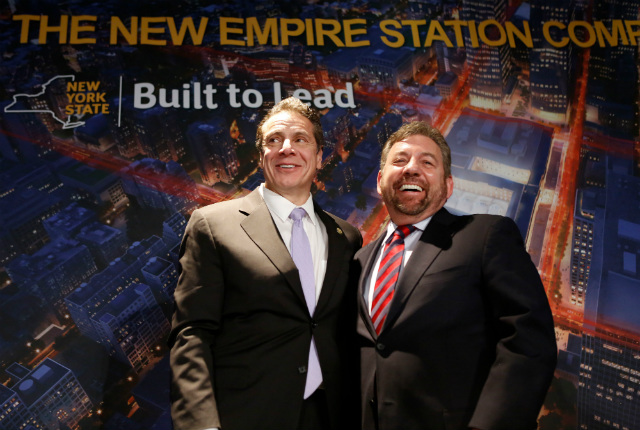 3. The fans buy the team

While the idea of municipal ownership is not unheard of, community ownership is a thriving model for leading sports teams worldwide. The Green Bay Packers, of course, are owned by a non-profit organization, and FC Barcelona (the second most profitable soccer team in the world) is owned a supporter-run organization. So why not us Knicks fans? In 2011, the Packers were able to raise $64 million from sales in stock for the team for stadium renovations. Imagine the amount that could be raised by supporters for the Knicks, in America’s wealthiest city? Surely enough to cover an initial down payment to Dolan, and then fans could let some combination of bonds or loans cover the rest.

In fact, there’s some very encouraging recent precedent: In 2017, Tilman Fertita (a real person, apparently) bought the Rockets while not handing over a single dime to the team’s former owner (in fact, the former owner loaned him money). Instead, Fertita funded the sale through bond sales in his company. Ownership groups (or non-profit organizations) need not have all the money on hand to purchase the team, just a viable path forward. Whether that means bonds or the world’s largest Kickstarter, that’s up to the fans, but it’s not impossible to imagine a scenario where motivated fans can drum up the money, maybe even with some help from the city.

Of course, again, the leagues involved would have to seriously bend from their conventional requirements for ownership groups. In the past, the NBA, which has been less conservative than the NFL when it comes to ownership groups, has been wary of even allowing publicly traded companies to own one of their teams.

“The NBA doesn’t have a clear set of rules, but they have a preference for a single wealthy person who has controlling interest of the teams, so there’s always someone responsible for anything—and that person is the person you can throw out and replace,” says Noll, referencing the forced sale of the Los Angeles Clippers in 2014. “I don’t know what the league would do if Dolan came to them and said he was selling to Disney. I don’t think you can predict they’d say no. It would at least take a few months to sort out. ” (Odds 2000-1)

4. Dolan keeps the Knicks until the sun expands and swallows the earth

As much as I’ve blown up the special operating permit into something that can be used as leverage against Dolan, it’s actually not that big of a deal to him. Dolan is a big donor to New York governor Andrew Cuomo and found a job for Cuomo’s #1 pal when his notoriety became too much for Albany to handle (see, notoriety is what MSG specializes in). Cuomo’s fake solution to the Penn Station imbroglio (which hinges on tax breaks in exchange for private developers turning it into a mall while ignoring substantive transit issues) threatens MSG’s subterranean theater, but keeps the arena exactly where it is. Under pressure from Cuomo, the City Council will almost certainly cave, although at the state level, Dolan might finally lose his tax break. MSG will stay put until the end of its next 10 or 15-year renewal at least, when Dolan will be looking for a brand new arena altogether (and the state will trip over itself to pay for much of it).

Some things do change (see Amazon), but the stadium scam is unceasing. And as long as the league keeps seeing green from the Knicks, Dolan won’t face any real pressure from them, Noll explained: “As long as the money keeps rolling in and the audience ratings for the telecasts keep up there, and Dolan doesn’t do anything that gives him truly ugly publicity, I don’t see the league doing anything about it.”

Luckily, in just under 8 billion years, both the earth and moon will likely be destroyed by falling into the sun, as the sun reaches its red giant phase. At this point, neither the Knicks or humanity will exist, meaning that James Dolan will no longer own the Knicks, for there will be no Knicks to own. (Odds 5-4)

The truth is, eventually, the Knicks will put together an above .500 campaign, and Knicks fans will lose their minds with excitement as the team gets absolutely demolished in the first round once again by the Bucks dynasty. They’ll remain wildly profitable, and Dolan will remain incredibly rich, and until such a day comes where the organization can stoop even lower (unimaginable but somehow likely), Dolan will be there sitting in the front row, disheveled and disgruntled, telling fans they’re really the ones responsible for not having a good time while watching their team get run off the court for the twentieth year in a row.

#james dolan
#knicks
#sports
#longform
#original
Do you know the scoop? Comment below or Send us a Tip