Can The Jets Keep Rolling? 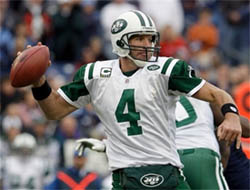 Having won five-straight, the Jets have seized control of the AFC East and their own destiny. Now, they have to avoid a letdown, as their remaining schedule doesn’t feature any really tough matchups. First up in the final five games is a Denver Broncos club that is not as good as their 6-5 record would indicate. Denver is like a boxer with a glass jaw, they can certainly score, but their defense can’t get off the field. They have allowed 380 yards and 27.5 points per game. They are also a -12 in the turnover department, a sure way to lose ballgames.

For New York returning home for the first time since beating New England and Tennessee, this game shouldn’t be a problem unless they make mistakes. Expect the coach and the quarterback to try and minimize those and roll out a conservative game plan. Denver will put up some points, but the Jets will roll on to 9-3.

Photo of Brett Favre by AP