Can The Green New Deal Save Civilization From Climate Change Catastrophe?

For those invested in civilization's survival, the last few years haven't offered much cause for optimism. Dire climate change reports seem to land on our screens weekly, with normally sober scientists issuing increasingly panicked warnings about the catastrophe currently in progress. Meanwhile, the president of the United States plugs his fingers into his ears and shouts into his rage machine, pausing only occasionally to insult the victims of our burning new reality.

In recent weeks, however, that debilitating sense of doom has showed signs of lifting. On November 13th, the progressive push for a Green New Deal burst onto the national stage with a march on Rep. Nancy Pelosi’s office. Members of the youth-led Sunrise Movement led the sit-in, and were joined unexpectedly by Rep.-elect Alexandria Ocasio-Cortez. Since then, nineteen Democrats have signed on to support the formation of a select committee to create a blueprint for the Green New Deal — a "galvanizing moment" not seen in decades, according to longtime environmentalist Bill McKibben.

To be sure, the details of what a Green New Deal would actually entail are still extremely vague. In broad terms, the proposal would urgently shift the United States away from fossil fuels and toward 100 percent renewable energy, while creating thousands of living-wage jobs to oversee the massive economic and social mobilization required. Theoretically, advocates say, such a comprehensive undertaking could offer a pathway to the "rapid, far-reaching and unprecedented changes in all aspects of society" that the recent IPCC report demands.

More realistically, the idea would probably require a trifecta of Democratic control — and even then, a similar proposal once championed by President Obama died a quiet technocratic death within months of him taking office.

But climate experts say that calculus has changed, thanks in large part to the mass uprising of grass-roots climate rage. In a recent Intercept story, best-selling author and social activist Naomi Klein described the significance of that momentum, writing, "Decades from now, if we are exquisitely lucky enough to tell a thrilling story about how humanity came together in the nick of time to intercept the metaphorical meteor, the pivotal chapter...will be the moment when a group of fed-up young people from the Sunrise Movement occupied the offices of Pelosi after the midterm elections." 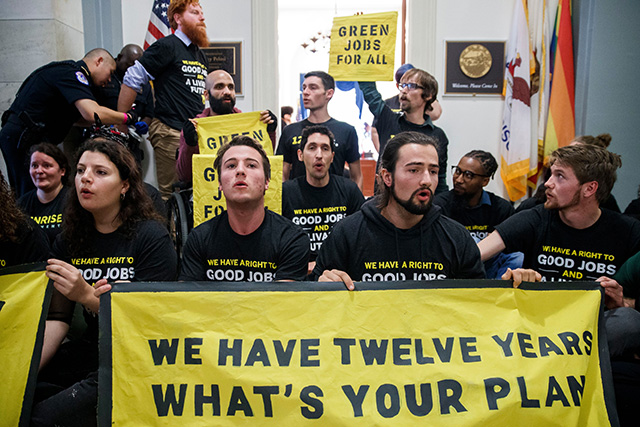 On Tuesday, we caught up with one of those fed-up young people. Reached by phone, Aracely Jimenez-Hudis, a recent graduate and full-time organizer with the Sunrise Movement, spoke to Gothamist about the organization's whirlwind month, the perils of incrementalism, and her "overwhelming sense of hope."

What is the Green New Deal? How does it differ from previous climate and sustainability proposals?

Our goal is to stop climate change while creating of millions of good jobs in the process. It's directly in response to this huge lie we've been fed by the fossil fuel industry and by fossil fuel-corrupted politicians. For decades we've heard this excuse that we can't stop climate change because it would be bad for the economy, or that people in the coal and natural gas industry would lose their jobs. We don't believe that's true. The economy is shifting toward 100% renewable energy, and with a Green New Deal we can provide job training programs that create better-paying jobs that don't destroy workers' health. So there's a lot of overlap with the labor movement and the Green New Deal.

Sunrise rose to national prominence seemingly overnight following the Pelosi protest, and now the group is one of the most prominent backers of this massive environmental stimulus project. How are you handling that attention and pressure?

It's been a whirlwind. There's this overwhelming sense of hope, which I think is something that is really rare in the climate movement, especially since the 2016 election. We've heard this from a lot of folks who've gotten involved with Sunrise in just the last month. They want bold, progressive change that has a real chance of turning this country around, and now they're confident it can actually be done.

It suddenly feels we've been talking about a Green New Deal for a long time. I have to put things in perspective and realize it's only been on the table in a mainstream way for less than a month, which is pretty astounding.

Thank you @NydiaVelazquez for you political courage to stand up for ALL our communities, from PR🇵🇷 to BK. https://t.co/9RduP03fHx

During a climate town hall hosted by Bernie Sanders earlier this week, Ocasio-Cortez said she hadn't planned for a Green New Deal protest to be one of her first actions in D.C. — a "poetry of history," she put it. Can you talk a bit about your movement's relationship to this new crop of elected officials?

It was really exhilarating. I'm from Brooklyn. I grew up in Sunset park. As another woman of color from a primarily Hispanic working-class community, I felt a lot of pride watching Ocasio-Cortez shine in the national political spotlight. Then to see her come to Nancy Pelosi's office and to stand with us and show her support, and to have her actually draft a proposal for this Select Committee [on the Green New Deal], it adds to that feeling of hope.

We're not just activists screaming into the void. We actually have allies in Congress who are willing to act on those campaign promises they made. It builds trust between our elected representatives and the people — not just in the climate movement but the social, racial and economic justice movements across the country.

Opponents, especially on the right, have attacked the plan for not being more detailed. What's your response to that criticism?

I run the Sunrise Twitter account, so I see that critique a lot online. If you're looking at the history of climate legislation in the United States, this is the first time in our country's history that we're even seeing a plan to make a plan to really tackle climate change.

You've been very critical of some Democrats as well. Last week, for example, the group organized a protest inside Senator Chuck Schumer's office to demand he not appoint West Virginia Sen. Joe Manchin — a major backer of the coal industry — to the top Democratic spot on the Energy and Natural Resources Committee. What other Democrats do you think need to be put on notice?

We know that there are some Democrats in Congress who have taken quite a bit of money from the oil, gas and coal industries. For example, Frank Pallone, who represents a coastal district in New Jersey. We visited his D.C. office the Friday after our sit-in at Pelosi's office, and we asked him to support the Select Committee on a Green New Deal put forth by Ocasio-Cortez. He kept saying that he wasn't familiar with the proposal, or that it wasn't necessary. He sidestepped questions about his finances, even when he was asked by one of his representatives.

So when we hear that, we hear lame excuses. We're pretty tired of it. Of course, Frank Pallone isn't the only representative like that. When we go to D.C. on December 10th, that's who we're targeting: primarily Democrats who have taken money from fossil fuel executives, from fossil fuel lobbyists, and those who continue to make excuses precisely because of these campaign donations.

We have until Dec 13 to set the agenda for 2019. A #GreenNewDeal MUST be a priority.

On a local level, some city officials are now calling for a Green New Deal for New York City, and hundreds attended a rally for the idea outside City Hall on Tuesday. What role do you think local governments will play in this?

For the most part, Sunrise's strategy is pushing this through the federal government, because if we're going to abide by the guidelines set forth by the IPCC report, then we need sweeping federal changes. On the state level, there's a bill called the Climate and Communities Protection Act [currently held up in the state senate]. A lot of New Yorkers don't know about that, and so we need local elected officials to raise awareness and push for that.

Also, in a lot of communities we're seeing corporate developers coming in and trying to tell us how to build up our economies, only to force them out of the neighborhoods they've lived in for generations. They bring in plans to the table that are just really out of touch with what the communities need — Jeff Bezos and Amazon is just the latest example. So mayors and city council members can stand up to these development forces, while supporting a Green New Deal that would actually bring good local jobs to the communities instead of pricing people out.

Sunrise boasts that its plan for a Green New Deal will be overseen by an "army of young people." Are you finding that your generation is more receptive to these progressive ideas?

Yes, definitely. We're a youth-led movement fighting against climate change. We obviously accept and welcome support from people of all ages, and we know that climate change and climate change-fueled disasters don't discriminate. But it's really important to put youth at the forefront of this movement. As demographics shift in the country, millennials and eventually Gen Z will become the largest voting bloc in American history. We need leaders who see the world's problems as we do, specifically who view climate change as the drastic, existential crisis that it is.

We hear so many leaders talking about climate change while saying that we need be conservative, or that we should strive for bipartisanship. That's essentially a death sentence to us, the people who are going to spend a majority of our lives facing the effects of climate change. We've read the reports, we know that we need to change our economy and our society away from fossil fuels and onto 100 percent renewable energy now.

Are you worried that your demands might be seen as too extreme, or too radical, by some potential allies?

I would tell them to look at what happened in California. Over 85 people are dead and hundreds are missing — and that's not even the final death count. We need to be extreme in our response because we're facing apocalyptic climate disaster. Just look at what's happening to the world around you. We have the money to fix it, all we're lacking is the political courage.

This interview has been lightly edited and condensed for clarity