The goal of fast, affordable Internet for New York City is something that residents and technology advocates have been pushing for almost as long as the Internet has been around. Mayor Giuliani dreamed of an unused water main becoming a high-speed Internet conduit. That never happened. Mayor Bloomberg used a backroom deal with Verizon exact a promise to provide insanely fast fiber optic services to all New Yorkers. That didn’t quite pan out, either. By the time Bill de Blasio entered Gracie Mansion in 2014, many people had resigned themselves to the idea that the largest city in the United States didn’t have a fast, affordable Internet option for its citizens.

The de Blasio administration, trying to bridge this gap between the city’s haves and have nots, envisioned a network of Wi-Fi hotspots, spread across the city, taking the place of the city’s decrepit and mostly useless phone booths. Almost immediately after de Blasio took office, City Hall issued a request-for-proposal for a company or nonprofit to come in and make the pay phone sites into "state-of-the-art public connection points" that would "transform the physical streetscape."

Flash forward three years and there are 400 hotspots, known as LinkNYC, in three boroughs. The physical streetscape surrounding these hotspots has certainly been transformed, but not quite as the de Blasio administration intended.

The monolith-like digital kiosks, which on top of the free Wi-Fi include a touch-screen tablet, USB chargers, and buttons to contact emergency services, started to pop up this summer. There were reports almost immediately from residents outraged that the kiosks were becoming gathering places for the city’s homeless. Newspapers and websites blared headlines about people taking over entire street corners to watch movies, or, on occasion, pornography. The city responded by adding content filters to the built-in tablets, but that still didn’t dissuade users from monopolizing the tablets for hours at a time. Last week, the city announced it was shutting down the tablets’ Internet browsing functions to consider next steps.

"The kiosks were never intended for anyone’s extended, personal use and we want to ensure that Links are accessible and a welcome addition to New York City neighborhoods," LinkNYC said in a statement.

The huge "beta" labels affixed to the corners of each of the monoliths certainly rang true.

CityBridge’s bid for the project was ambitious. It promised to install the kiosks free-of-charge, and provide blazing-fast Internet at 7,500 sites around the city. In theory, by opting in to the system on her phone, a user could be handed off from kiosk to kiosk as she traveled through the city, achieving the long-held dream of high-speed public Internet. The consortium would earn advertising money off of the massive electronic billboards on each of the kiosks, and also have unmatched access to America’s largest consumer and media market, as it scooped up data from everyone’s phones and laptops. LinkNYC declined to comment for this story.

A week since the shutdown, City Hall is unsure of when and if the browsing function will ever be restored.

"There were concerns about loitering and extended use of LinkNYC kiosks, so the mayor is addressing these quality-of-life complaints head on," said Natalie Grybauskas, a spokesperson for the mayor. "Removing the Internet browser from LinkNYC tablets will not affect the other great services LinkNYC provides—superfast Wi-Fi, free phone calls, or access to key city services—but will address concerns we’ve heard from our fellow New Yorkers."

But the browsing function doesn’t really seem to be the main issue that business owners and community members are upset about. People are still congregating around the kiosks to use the USB charging stations and free phone calling functionality. On a recent afternoon, several kiosks along Eighth Avenue had people connected to them, charging their phones and using the now Internet-less tablets. With no seating available next to the kiosks, people have taken matters into their own hands, dragging over newspaper boxes and flipping them on their sides.

"I don’t know why they’re not designed like a phone booth with shelves you can put your phone on—look at me, I have to sit on the ground just to get a charge," said Jason, a man who said he is homeless and who was charging his phone at a station in Chelsea. He explained that many times as he charges his phone or uses other kiosk functions, security people from nearby buildings or businesses will harass him and tell him to leave. "These are public sidewalks, and I live my life here. Sometimes you’re in the middle of something and someone will just boot you off," he said. 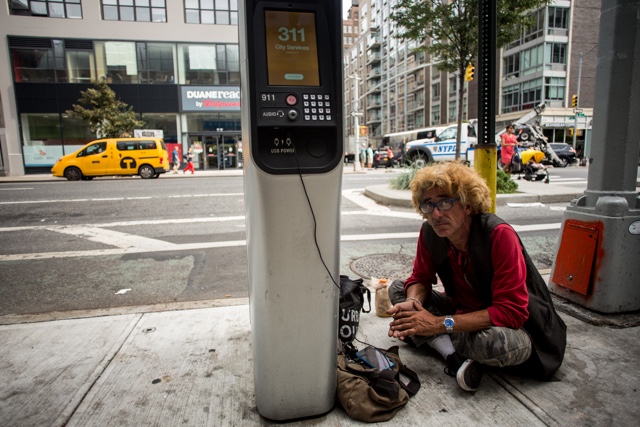 Jason at a LinkNYC kiosk in Chelsea. (Scott Heins / Gothamist)

Jason said the kiosks have become an issue of "territory" for much of the street homeless population in Chelsea. He’d even been attacked by people who believed a certain kiosk belonged to them. Still, he believes the kiosks have become a necessity. With Wi-Fi and charging stations, he’s able to stay connected in a way that he wasn’t able to be before. Wasn’t that the goal of the project to begin with?

Apparently, at least to City Hall, it wasn’t. A spokesperson from the mayor’s office pointed out that the city already offers Internet access for individuals without smartphones or laptops, through public libraries, NYCHA resource centers, and Parks Department recreation centers. The goal of LinkNYC, rather, was to provide Wi-Fi access to those already with access to technology. The tablets with browsing capabilities were just a bonus.

But homeless advocates say the browsing tablets were part of what made the LinkNYC project so attractive in the first place. When the city unveiled the kiosks back in January, the mayor highlighted the Internet-browsing tablets as a core functionality. Now that functionality is gone. 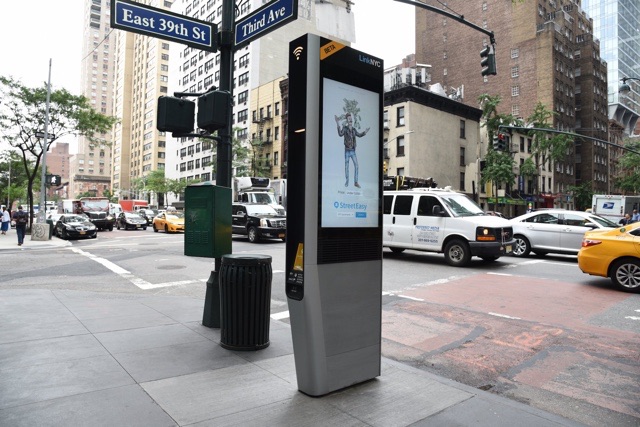 "Giving Internet access to those who don’t have it is a great idea," said Al Williams, a member of the advocacy group Picture The Homeless. Williams said that he couldn’t understand why the city didn’t install web filters on browsers in the first place, or anticipate that people would hog the tablets. Even at the library, Williams pointed out, there’s a time limit on how long you can use a computer.

State Senator Brad Hoylman, whose Midtown district includes many of the 400 existing kiosks, was also surprised the city didn’t see the issues with the kiosks coming. "It serves a public function and has some unintended consequences. Anything on the streets of New York, whether it be a park bench or Wi-Fi kiosk, will be repurposed, and I think the designers might have been naive to consider what they would be used for," he said.

Hoylman said that he wished City Hall had been more communicative in the lead up to the installation of the kiosks in explaining their intended purpose. If the city had presented renderings of the actual kiosks to community boards before they were installed, he said, that might have alleviated some of the distrust of the kiosks. (According to Grybauskas, the NYC Department of Information Technology and Telecommunications gave multiple presentations to community boards on the project back in 2014 and 2015, well before the kiosk designs were finalized.)

Despite the current dust-up, City Hall told Gothamist that it remains committed to rolling out the remaining 7000+ kiosks to the rest of the city.

Across the street from where Jason was set up on the sidewalk, Arvit, a 32-year-old analyst from Park Slope, fiddled with his phone as he tried out the Wi-Fi signal from a nearby LinkNYC kiosk. He said he was hopeful that the signal would reach to his office in the building above.

"It’s gotta be faster than what we have up there now," he said.