Last week, Congressman Dan Donovan put on his go-to uniform of blazer and shiny congressional button and strode into the ShopRite on Staten Island’s Hylan Boulevard.

Near the exit, mostly elderly shoppers rolled their carts by, blessing him and shaking his hand.

“When you look at all of New York City, there’s thirteen members of Congress: twelve Democrats and me. I’m the only Republican in the whole delegation,” Donovan told Gothamist. “But my voters vote for the person,”

With three weeks before election day, Donovan said that he was unconcerned about his Democratic challenger, Max Rose, who according to new FEC filings now has $1.4 million to Donovan’s $280,000 cash on hand. The Rose campaign says it has knocked on roughly 300,000 doors, placed nearly 3,000 lawn signs, and said 200 people are regularly volunteering for him as of last week.

In comparison, Donovan’s campaign estimated they contacted 125,000 voters via both door knocking and phone calls, placed 1,200 lawn signs, and said the campaign had “a couple hundred” volunteers not including unions, but did not supply a number. Spending by the candidates has been neck and neck, at about $2 million each,

The congressman, flanked by a Today Show correspondent and cameramen, glad-handed his way towards the glass cases holding heaps of filleted fish.

“Of course I’m voting for him, you kidding me?” said a stout, barrel-chested Bart Brandi, gesturing at Donovan. “Unfortunately, I’m registered as a Democrat,” Brandi said with a grimace, before letting out a burst of laughter. “But I vote Republican!” he said, glancing ahead at two women who were holding up the line, proclaiming their loyalty to Trump for the cameras.

“The South Shore is all for [Donovan] anyway. I’m in the middle. Bay Terrace. The only problem is the north shore. They are all for that other guy — Max Rose,” Brandi said, before cocking his head to the side and hollering: “Can I have a pound of flounder?”

In a district that overwhelmingly voted for President Donald Trump (who has endorsed Donovan), the common assumption is that this Staten Island district is Republican territory, but the political geography of the 11th district is more complex. Consider this: More than 30 percent of the district’s voters are in South Brooklyn portions of the district, and while Donald Trump beat Hillary Clinton by nearly 10 points here, Democrats actually outnumber Republicans by a 5:3 ratio. 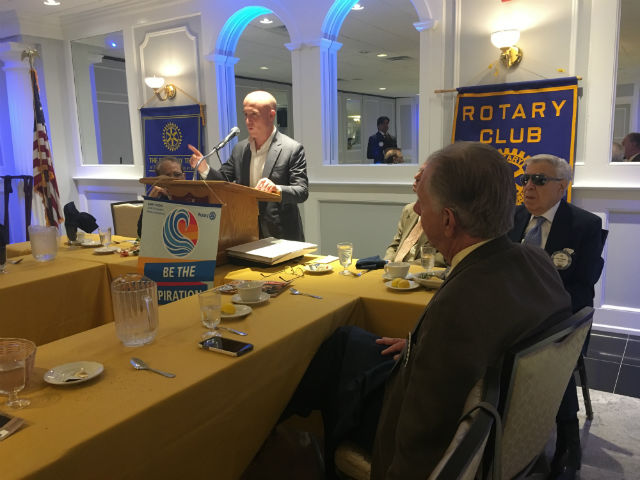 On Staten Island, Democrats make up 45 percent of registered voters, Conservatives and Republicans are collectively 28 percent, and independents are 22 percent, said Jerry Skurnick, an election numbers expert and political consultant at Prime NY. “There are more registered Democrats than Republicans there, but a lot of those Democrats are pretty conservative,” Skurnick explained.

The political attitudes map like a gradient, from blue to red as you scan southward. “That’s one thing that’s easy about Staten Island,” Skurnick said. “North is liberal, south is very conservative and in-between is a marginal area”—and so, these ShopRite shoppers were voters in a key battleground.

Donovan found another receptive audience in the produce section, where he met local resident Joseph DiPisa, near the green peppers.

When asked about President Trump, DiPisa proudly offered that he had helped build Trump Tower in the early 1980s. The NBC interviewer pivoted back to the congressman, who was quick to don the mantle of presidential favorite. “The president does very well here,” Donovan said, rattling off a list of Trump’s accomplishments.

But as DiPisa walked away, I asked who he planned to vote for. “I don’t like the bullying he does, this president, and he makes friends with our enemies,” DiPisa said, referencing Trump’s kind words for North Korea’s totalitarian dictator. Fairness, he said, is the quality he’s looking for.

“[Max Rose] sounds pretty good. I like veterans. I’m a Legionnaire,” DiPisa said, noting that he’s also a registered independent. “Donovan’s all right. When it comes time, let’s see what happens. I haven’t really decided who to vote for, but I usually lean Democrat. I come from Brooklyn originally,” DiPisa said.

Skurnick believes the Democrats will take control of the House of Representatives this election, but for Staten Island, the size of the “blue wave” nationally will be a bellwether for the outcome of this race in New York City’s lone Republican congressional stronghold.

“If it really is a Democratic wave and they pick up 50, 60, 70 seats, then I think Donovan’s in trouble. But if it’s a more manageable number, I think he’s probably okay,” Skurnick said.

It’s the mid-island residents, like Brandi or DiPisa, that will likely determine the race—and there are still votes to be won. 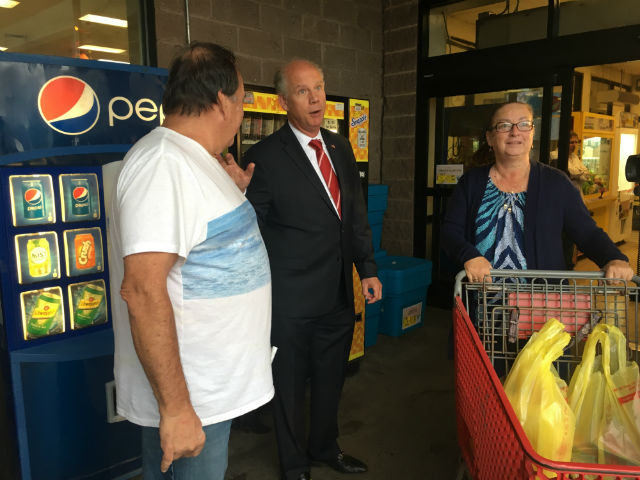 At the Chevrolet dealership across the street from the ShopRite, a parade of political campaign signage adorned the perimeter fencing for local Assembly and judicial races, but nothing for the congressional race.

“We haven’t heard from them,” said Mike Romeo, one of the dealership’s higher ups, who was taking a smoking break in the parking lot. Romeo said he had no preference for Republicans or Democrats. “We’re for everybody. Tell him to come on over.”

While there is little that Rose and Donovan will openly admit they agree on, both say that party-line voting is not Staten Island’s brand of politics. People there vote for the person, not the party, they say. There are certainly unique voting patterns, experts note.

“One of the interesting things that always catches my eye about this district is when [Michael] Grimm won in 2014, Gov. Andrew Cuomo also won this district,” making it likely that voters strategically split their tickets, said Steven Romalewski, director of the CUNY Mapping Service for the Center for Urban Research at the CUNY Graduate Center. “Democrats have won this district, although more so at the executive level than at a congressional level.”

In the absence of public polling, however, political prognosticators have called Rose’s shot an “uphill fight” against Donovan and several rate the race “likely” or “lean Republican.” In other words, pundits have said the deck is stacked against the 31-year-old Democrat.

“I can promise you: We are going to win and it is not going to be close,” Rose told Gothamist last week.

The candidate was similarly combative at the first of two debates in Bay Ridge last week.

“I’ve served longer as your congressman than he’s lived in the district, that’s what I’m saying,” Donovan said, to a smattering of claps. “He’s not one of us. He doesn’t understand the issues that we’re dealing with. He hasn’t been here. I’ve been here for 62 years.”

“Congressman, I’m sorry I didn’t move here earlier, I was too busy defending my country in Afghanistan,” Rose shot back, drawing whoops and hollers.

Amid towers of “Max Rose for Congress” lawn signs in his sparse campaign headquarters, Rose sat back in his tailored gray suit, legs crossed in a metal folding chair. For all his “kick-ass veteran” messaging in his campaign and his beer-guzzling photo ops, Rose also holds a masters in Philosophy and Public Policy from the London School of Economics, and he studied at Oxford University before serving as a platoon leader in Kandahar province, where he was injured by a roadside bomb.

Broadly, it appears Rose is campaigning on a platform promising change while hanging Congress’s failures and local grievances around Donovan’s neck, with a distinctly Staten Island flavor—from economic inequality and pay-to-play politics to the district’s commuting woes and the opioid crisis.

“I have not had the opportunity to go into the weeds as much as I would like to on the opioid epidemic,” Rose said. “So many of our policy ideas today are to fight the war of the past. Many people are still dying of pills, but we have such a high number of folks that are dying from Fentanyl-laced heroin right now,” he said, and the move by Staten Island’s current district attorney to make every overdose a crime scene is an idea that should be replicated nationwide with federal funding.

“There’s a need for complex, holistic solutions,” Rose said. “The opioid epidemic is a great example of that.”

“You can take that same mindset and try to address very complex health disparities and health crises in this country. Our commuting nightmare. Infrastructure requires that. A crisis that the middle class is enduring right now where it’s harder and harder to get into the middle class and stay there,” Rose said.

Rose strikes a decidedly non-confrontational tone with police officers on racial justice issues—in contrast to many New York City Democrats. When asked whether justice was served with regards to Eric Garner, a black Staten Island man who was killed by a white NYPD officer’s chokehold in 2014, the candidate only criticized the 4-year duration of the federal civil rights investigation and said he’s eager to see what comes of the NYPD’s reinvigorated disciplinary process.

“We’re presented with this false choice that we’re somehow either anti-cop or anti-community—and I’m pro both,” Rose said. “There is a larger issue here of police-community relations, and a trust deficit, and a legacy of injustice.”

While Rose has the endorsement of both President Barack Obama and Vice President Joe Biden and Donovan has Trump’s, both candidates have taken pains to distance themselves from party leaders. Rose put out an ad criticizing Mayor Bill de Blasio and repeatedly disavowed support for Nancy Pelosi’s leadership. Some observers have noted that Donovan, meanwhile, has de-emphasized Trump’s support in the general election and often highlights that he voted against the Republican tax bill.

Still, Donovan clearly understands that if he can rally enough die-hard conservatives, he’s likely to win—voters like Giovannina Fabrizio, a fiery senior citizen who Donovan found in the ShopRite cosmetics aisle.

“These Democrats across the bay?” Fabrizio made a guttural spitting sound. “They stink.”

“Staten Island is Republican,” she said. “It’s the rest of New York City...they’re not even Americans.”

Donovan smiled wryly and waved reporters in her direction.

“I think you want to talk to her!” Donovan said.

#dan donovan
#election 2018
#eric garner
#max rose
#republicans
#staten island
#original
Do you know the scoop? Comment below or Send us a Tip