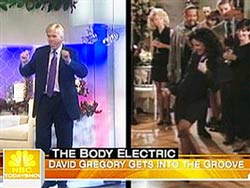 Gregory's place at post-Russert NBC News seems unclear, since numbers for his MSNBC show, The Road to the White House, have been flat month to month. And the show's lack of buzz, relative to Countdown with Keith Olbermann and Hardball with Chris Matthews, could be one reason, as the lack of newsmaking guests. The New Yorker's Ken Auletta says, “If you think he has real talent—and boy he does, he’s a good ad-libber, he’s good on his feet—you would think that NBC would think twice about building that brand before they mix news with opinion. On the other hand, if he does not develop an opinion voice, is he vanilla as an anchor on MSNBC?”

Speaking of Gregory being good on his feet, his dancing has been analyzed by his colleagues. See the video below.

One Observer commented wondered why there was no mention of frequent MSNBC guest Rachel Maddow, who got a big profile in last week's Times. She's on the short list for her own talk show, apparently.