'Can I Run A Red Light?': A Brief Guide To NYC Bike Etiquette

Congratulations! You’re one of the 1.6 million New Yorkers who have biked in the city over the last year. Now that you’ve tasted cycling’s addictive combination of childlike joy and unparalleled convenience, you may be asking yourself a few questions as you keep riding. Do I have to tell someone I’m passing them? Is it rude to ring my bell at pedestrians? May I run a red light (or five)?

In the six years since I last wrote an etiquette guide for New York City cyclists, I’ve survived a few minor crashes, gotten two red light tickets, discovered the joys of riding to the beach, had three bikes stolen (one I got back after a foot chase with some teens), and logged over 1,200 miles on a Citi Bike.

While my experience doesn’t make me an Expert on biking etiquette, it does mean that I’ve had lots of time to ponder the physical, legal, and moral dilemmas that 800,000 regular New York City cyclists face every day. (The answers to the three questions above are: yes, no, it depends.)

Here are some guidelines when striving to be a safer, more considerate, more empathetic cyclist.

Breeze in your hair, sun on your face, 18-wheeler in your peripheral, it is very easy to ride a bike and think only of your destination and how to get yourself there. Everything else is an obstacle.

But pedestrians aren’t obstacles any more than you are an obstacle to that coffee-stained driver, sitting in a shimmering procession of hell, yelling at his windshield.

Putting pedestrians first doesn’t just mean always ride behind the pack as they cross the street, never in front, though it means that too. Unlike the aforementioned driver, you have the ability to communicate with these people beyond the blast of a horn—use it.

Say “excuse me” when you are turning, “thanks” when someone allows you to pass, and yell a sincere “Sorry!” if you cut it too close. It won’t make someone less angry if you clip them as they step off the curb, but it will let them know that you’re human.

Looking out for the safety of pedestrians will help ensure your own. Slowing down (or—gasp—stopping!) enough to account for these lovable bipeds means less precious brain juice spent gaming out the increasingly insane array of decisions you’ll have to make in fractions of a second at high speeds. You’re supposed to enjoy the ride! 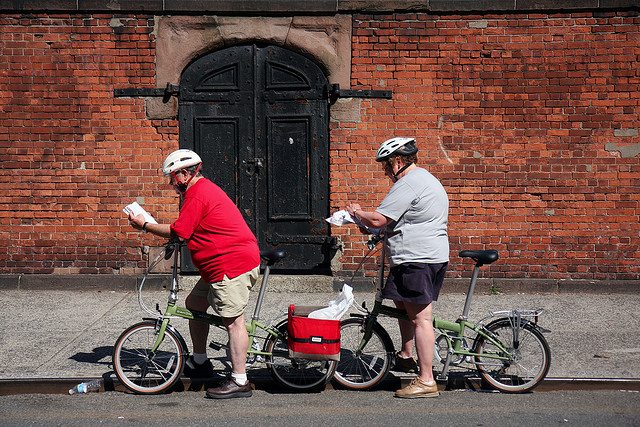 Breaking the law? Be reasonable.

Some cyclists will tell you that all cyclists should obey every traffic law always, because scofflaw cyclists give people license to scream about those damned scofflaw cyclists who practically (but not actually) KILL hundreds of people on every street corner across town, and besides, YOU are the only thing that you can truly control out there on these streets.

This theory assumes that you, a cyclist, have the same amount of power on New York City streets as everyone else. Behave yourself around barracuda, little sardine, because you never know who might be watching. Anyone who has felt the hair on their neck stand up at the sound of a box truck gate slam down after rolling over the same pothole you just biked through three seconds ago knows this theory is unreasonable.

“What we see as people behaving ‘badly’ is really people just doing what they have to do to survive,” Dr. Tara Goddard, an urban planner at Texas A&M University, recently told my colleague.

“We've told bicyclists, ‘Oh, you just need to act like a car.’ But the infrastructure is all set up for cars and drivers, so we're shoehorning this mode into a system that's not made for them—and is actually really often dangerous for them—and then expecting them to behave a certain way and getting really mad when they don't.”

As the second-least powerful entity on these streets (see above), the responsibility of the cyclist is to ensure that you get where you need to go safely, without harming anyone else.

Should you wait at a red light next to a massive carting truck on a road without a bike lane, or stop at the light, look both ways, and continue through the red, putting as much distance between you and the death machine as you possibly can?

There’s a car in the bike lane ahead—should you hope that the line of speeding cars and trucks behind you will let you merge into the traffic lane, as required by law? Or do you run the four-way stop sign so you can safely skirt ahead of the blockage?

Do you go the wrong way (also known as “salmoning”) down the street for a block and a half, or do you expose yourself to seven harrowing blocks of drivers exiting a highway?

Obviously, cyclists should not break traffic laws whenever they feel like it. Only jerks run red lights into throngs of pedestrians who are trying to safely cross the street.

But there are life-or-death stakes baked into countless decisions cyclists have to make every time they ride on city streets, and you should make them based on reality, not some other city in which cycling is treated seriously as a mode of transportation, most of the streets are designed for people, not motor vehicles, and drivers are truly held accountable for their actions.

And if you have to ride on the sidewalk, dismount when you approach pedestrians.

We’ve just established cycling’s hazards, but its rewards are just as tangible. You’re quicker than you would be on foot (and in some cases, especially in Manhattan, than you would be in a car), and you get to commune with the city in ways a straphanger can’t. Such awesome power! It must be wielded humanely.

If you are grinding your teeth trying to pass every single cyclist up the Williamsburg Bridge bike path, and darting unsafely into the pedestrian lane, you are probably going too fast. Chill out.

If you are flying down the blind curve on the Manhattan Bridge bike path, you are DEFINITELY going too fast, slow down!

If you are using one hand to press your cellphone against your ear and have an out-of-breath, shouty conversation when you should be paying attention to what is happening around you, you look like Alec Baldwin, and you should put your phone in your pocket (don’t bother to hang up because that requires you to look down at your stupid phone) and let the caller hear the whoosh of the wind through fabric until you get to a safe place to chat.

If you are using one earbud...you are a law-abiding, reasonable cyclist.

If you are using two earbuds, remove one earbud and see above.

“HEYOHAWHAANNNG!” is not an acceptable way of passing your fellow cyclists if you can help it. Pass with class, and plenty of notice.

Two abreast (on a bridge?!)? Surely you jest.

And if you’re carrying your bike on the subway, maybe don’t try and play human Tetris at rush hour. There will always be another train (probably).

#bike etiquette
#bike lanes
#bikeweek
#biking
#cycling
#etiquette
#salmoning
#we the commuters
#original
Do you know the scoop? Comment below or Send us a Tip