'Can I Make My Boyfriend Wear A Helmet?': A Few More Of Your Bike-Related Questions Answered

The past week We the Commuters has dedicated its coverage to cycling in the city. Through social media, email, and comments, readers have asked us to report on their biking questions: where can we learn to ride? Why does the NYPD park in bike lanes? Why do drivers and pedestrians seemingly loathe cyclists so much? Here are a few more of your stray questions answered.

Why is there ANY free auto parking on NYC streets? Why are car owners considered a privileged class who deserve extremely valuable plots of public land to store their property? All this space should be shared for safer deliveries, drop offs, and bike lanes. -Wyatt

The Department of Transportation estimates that there are around 3 million free parking spaces across the city. Donald Shoup, a professor at the Department of Urban Planning at UCLA and parking expert, claims that if “laid end-to-end, New York’s three million on-street parking spaces would stretch almost halfway around the earth.” And if only half of those spots were metered at a mere $5.50 a day, it would generate $3 billion a year for the city. That is three times more than the amount estimated to be earned through congestion pricing.

It didn’t used to be this way. According to bike historian Evan Friss, when cars first came to the city in the 1890s, they were subject to the same regulations and cultural expectations of carriage and horse users. This meant only temporarily parking vehicles on the street and putting them in stables or garages overnight.

Friss lays much of the blame for free street parking on the American Automobile Association (AAA): “The AAA was part of the big group lobbying for this.”

In the 1950s, car enthusiasts and the AAA started pushing for street space to be reallocated for parking. Part of this was due to building restrictions in new apartment buildings and the limiting of garages to industrialized zones. In 1950, the Lower East Side became the first section of Manhattan that permitted overnight parking, a practice that soon spread throughout the five boroughs.

When asked why the parking was and still is free in New York City, Shoup replied, “Just because of inertia.”

“When we talk about transferring money from a certain group of people, curbside parkers, to another group of people, we should have a certain amount of humility,” says Charles Komanoff, an energy policy and transport economy specialist. “Pricing and appropriate pricing should be started in the districts where it has the greatest net utility, which is the most heavily trafficked.”

Komanoff added, “Pricing curbside space to reduce its occupation for regular, garden-variety car storage would be a boon for New York City in a way that would transcend cycling.”

To the second part of your question, “Why are car owners considered a privileged class…?” We are not precisely sure. Perhaps some of the car drivers (or Mayor Bill de Blasio) can answer that in the comments. 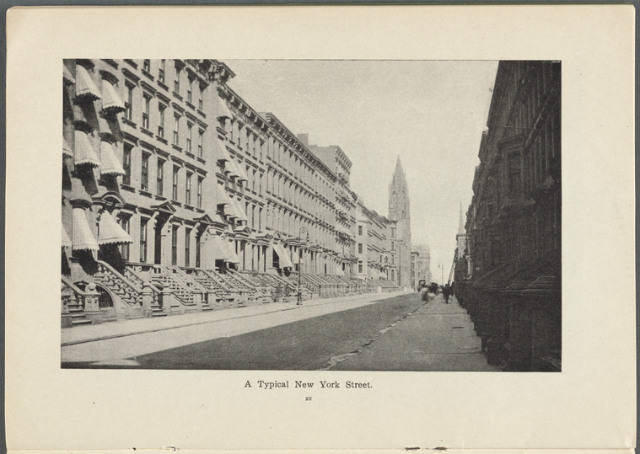 I always argue with my boyfriend that he needs to wear a helmet. Are there statistics on how many deaths from bike accidents are a result of people not wearing helmets? -Jennifer

Studies have consistently found that wearing a bicycle helmet is positively correlated with better bike crash outcomes. According to the Insurance Institute for Highway Safety, 54 percent of cyclists killed in 2017 were not wearing helmets. Since 2010, the statistics for those killed wearing helmets has remained fairly consistent around 16 percent.

A review of all death certificates and emergency department injury data from 1984 to 1988, suggested that helmets could have prevented approximately 2,500 deaths and 757,000 head injuries. And a study published in 2015 on New York City, found that cyclists wearing helmets were less likely to require a head CT scan at the hospital, and of those that did receive a CT scan, helmeted bicyclists had lower rates of intracranial injury, skull fracture, and subdural hematoma.

Critics say that helmet laws prevent huge numbers of potential cyclists, while only making people marginally safer. There is some research to back this claim up.

In “Intended and Unintended Effects of Youth Bicycle Helmet Laws,” Christopher S. Carpenter and Mark F. Stehr found that state laws in the U.S. requiring helmets was correlated with a reduction in youth bicycling by 4 to 5 percent, while reducing youth bike fatalities by 19 percent.

Gregg Culver, a researcher at Heidelberg University, looked at the link between encouraging helmet use and the “(re)production of unfettered automobility.” He argued that the focus on helmets did not ultimately help improve cyclist safety.

And Piet De Jong studied the conundrum of mandatory helmet laws by weighing the costs of reduced head injuries against the cost of foregone exercise by reducing cycling. He concluded that in safe cycling cities, helmet laws will likely have a negative health impact, and in spaces where cycling is unsafe, the laws do not make it significantly safer for cyclists. Critics also cite the fact that the majority of traumatic brain injuries are caused by falls, yet people do not have to wear helmets while walking.

As it stands, New York law does not require helmets for riders 14 years or older, but there’s no law that says you can’t make your boyfriend wear one.

How dangerous are e-scooters? - Sasha

The newness of e-scooters makes longitudinal studies on these vehicles impossible. However, three cities have already launched studies on the vehicles.

In Austin, Texas, research done by Austin Public Health found that one third of all injuries sampled happened during a rider’s first time using a scooter. Half of these riders sustained a head injury and 15 percent experienced a traumatic brain injury.

Another review in LA found that e-scooters were implicated in 249 emergency room visits. Of those visits, 40.2 percent were head injuries, 94 percent were shortly discharged home, and only 2 had severe injuries and were admitted to intensive care.

Taking a proactive approach, Portland, Oregon conducted research on a pilot program which sought to identify how e-scooters could reduce traffic congestion, fatalities, and air pollution and expand mobility opportunities for low-income Portlanders. During the pilot, e-scooters caused 5 percent of total crash injury visits though none of these accidents required emergency transport, and the positive results of the study have encouraged the city to conduct further pilots on the e-scooter program. For instance, 34 percent of Portland riders and 48 percent of visitors took an e-scooter instead of a car trip, according to the study.

New York Personal Injury Lawyer Daniel Flanzig commented that although he was a fan of the scooters, he worries that “the road conditions from harsh NYC winters and ongoing street openings make it incredibly dangerous for e-scooters to safely navigate the streets.” He says his office is already representing a number of clients involved in car vs. e-scooter collisions.

One potentially dangerous element of e-scooters that often goes unmentioned? The possibility of unstable battery explosions. In 2018, Lime recalled 2,000 scooters for fear of a battery malfunction, joining the long list of micro-mobility devices with potentially defunct technology. (And we’ve seen other ubiquitous forms of technology go through similar growing pains.) 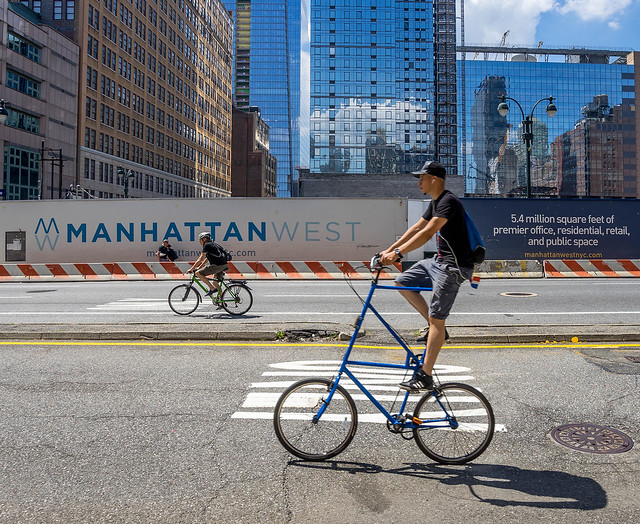 When did the laws about bells and bikes start and why? -Andrea

When bicycles initially arrived in New York City, they provoked both curiosity and fear. “One of the reasons that people thought bicycles were dangerous was because they were so quiet,” Bike historian Evan Friss explains. “Bicycles were nearly silent in a cacophonous city.” Because carriages and horses made noise as they passed, pedestrians often did not look before crossing the street, making these silent cruisers seem particularly sinister to an unwary walker.

Pedestrians and other street cruisers lashed out at the new vehicle (sound familiar?). In On Bicycles: More than 200-Year History of Cycling in New York City, Friss tells the true, and perhaps highly relatable, account of 19th century bike commuter Arthur Hyde who had to carefully avoid the newly minted bike cops, got “‘run down by...a potato dealer,’” and was lamentably “‘fated to knock someone down once a year.’”

To soothe the fears of other road users and legitimize bicycles as a vehicle in the city, cycling groups lobbied for road laws and regulations. In 1897, New York City passed the country’s first traffic regulations on how bicycles could move in relation to other vehicles. The ordinance required cyclists to ride under eight miles per hour, carry a lantern at night, and sound either a bell or gong when turning corners or passing.

Today, the bell requirement is also occasionally used to target cyclists for other activities police deem unsavory, like group rides. And some critics point to the crackdown on violations of bike law as akin to stop-and-frisk. At the same time, with the near sound-proofing of cars and the greater use of earbuds since 1897, it is difficult to say what impact the bell regulation has on cycling safety in present day.

The animosity- is it because of cars and car culture? Did it begin with Robert Moses? -Wesley

This is one of the most constantly asked yet somewhat un-answerable questions from cyclists. What is certain though, is that the hatred towards bicycles and those that choose to ride them started long before Robert Moses. When the velocipede, the bicycle’s predecessor, first arrived in the city in 1819, it only took three months for lawmakers to ban all the contraptions from city parks and sidewalks.

Additionally, and contrary to popular belief, Robert Moses was not necessarily against bicycles. Though, he did believe that they were better suited for leisure rather than a vehicle for transportation.

In 1938, Moses designed the “Program of Proposed Facilities for Bicycling,” an ambitious 58.75 miles of bike paths over all five boroughs. These paths were meant for cyclists and cyclists alone and would have expanded the city’s, then, 5.5 miles of paths substantially.

In terms of the true origin of all the disdain towards cyclists, historian Friss’s theory is the bicycle itself, which can serve for leisure, commerce, and transportation; “It’s this malleability that is used against it. It can be used to represent gentrifying hipsters, immigrant delivery workers, and rich white men in spandex. It has always struck a chord and been used as a proxy for larger debates.”