Can Big Brown Win in the Test of the Champion? 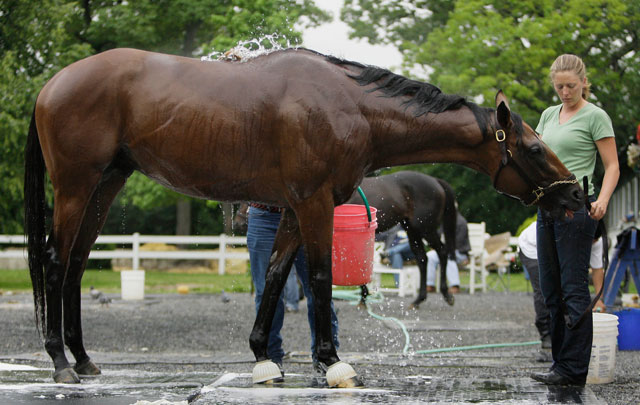 Will he do it or won’t he? That is the only question heading into the Belmont Stakes tomorrow. Will Big Brown become the first horse to win the Triple Crown since Affirmed in 1978 or will he join the nine other horses since then who won the first two legs, only to fall short at the Belmont?

Big Brown’s trainer thinks he will win and the crack that developed in his hoof has healed, but there are a few horses that could stop history. One is Casino Drive, brought in from Japan because, as his owners say, “he was bred to win the Belmont Stakes. That's more than talk considering Casino Drive is related to 2006 Belmont winner Jazil and 2007 Belmont winner Rags to Riches. The three horses share the same dam, Better Than Honour. Unfortunately, Casino Drive has a bruised hoof, and while his trainer doesn't think it will affect him during the race, it certainly won't help. Two other horses to watch are Denis of Cork and Tale of Ekati finished third and fourth at the Kentucky Derby and have rested since then. That may be a big advantage tomorrow when temperatures are expected to be in the mid-80’s around race time.

But the race all comes down to Big Brown. He has drawn the inside post (23 Belmont winners came from the number 1 post since 1904 including 4 of the last 11 Triple Crown Winners) which means he will probably come out and set the pace. Can Big Brown keep it up over 1-1/2 miles? We will all find out tomorrow afternoon.

Post time for the Belmont Stakes is 6:25pm with coverage starting at 5pm on ABC.

#Belmont Stakes
#Big Brown
#Casino Drive
#Denis of Cork
#horse racing
#sports
#Tale Of Ekati
#Test of the Champion
#Triple Crown
Do you know the scoop? Comment below or Send us a Tip