Can A Political Journalist Run For Office And Still Be A Journalist?

Political journalist Ross Barkan announced his surprise run for State Senate a little more than a week ago, but he’s already learned what is arguably the saddest, most salient lesson in the brutal world of New York politics.

“How important money is and how much it consumes your thoughts,” Barkan says. “As a journalist, you have an intellectual understanding of it. But you don’t understand how much work goes into that and how much time is taken up by money. Week one is finding myself in a casual situation, and saying ‘Okay, I see 10 people in a room, if they all donate that’ll put me 20 percent toward my arbitrary goal this week.’ You don’t wanna think that way!”

He adds, “I lament this reality, and I’m going to overcome it.”

It’s observations like these that Barkan, a Bay Ridge native who is running as a Democrat against Brooklyn Republican State Senator Marty Golden, hopes to reveal in a series of columns documenting his run.

“I am a journalist who has not been shy about sharing opinions on this incredibly dysfunctional political landscape,” Barkan says. “Now I’m running for office to do something about it, and along the way I am aiming to educate people on how politics works. I’ve been doing that in my capacity as a columnist on the outside, now I’m offering a different perspective from the inside.” 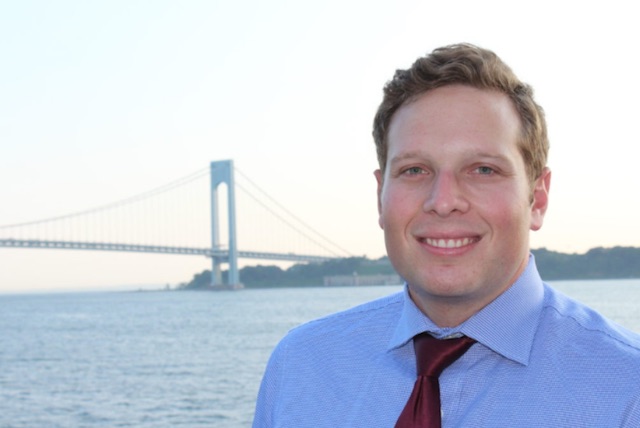 “Journalists have no place on the playing fields of politics,” reads The New York Times’ Ethical Journalism handbook. The manual generously adds that “staff members are entitled to vote,” but that’s about it. No campaign contributions, no buttons, no bumper stickers, no public demonstrations. “Seeking or serving in public office plainly violates the professional detachment expected of a journalist.”

Few readers would mistake Gothamist for The New York Times, so we reached out to journalists who teach ethics for a living for their insight.

“Say a particular columnist had a business, and decided that in this column, the columnist was going to extoll the virtues of this business, that would be very clearly something that would be an ethical violation,” says Lonnie Isabel, a professor at Columbia Journalism School and the former deputy managing editor of Newsday. “In some ways the question is: Is a run for political office, and writing about it, like assisting yourself in any other endeavor? And I would say that it doesn’t measure up to that [ethical] test.”

“Now having said that…a columnist is not a reporter. A columnist is someone given a lot of leeway to conclude some things that could be seen as partisan. I think you could make an argument that his column is a further means of doing what a columnist is supposed to do: look through the evidence and the facts and come up with an informed opinion that is very cohesively stated.”

Geanne Belton, a professor of media law and ethics at Baruch College and the CUNY Graduate School of Journalism, said the idea of Barkan writing a column about what it’s like to run for political office, “is intriguing and would be informative for readers.”

“The whole nature of this approach would involve transparency with the audience,” Belton writes in an email. “A tricky question is whether granting one candidate this visibility would be bestowing an unfair advantage upon one candidate over his rivals or arguably providing free publicity? That's a question for the editors to consider.”

Another question for Barkan: didn’t he resign his job as a politics reporter at The New York Observer (now just The Observer) in large part because he believed the paper’s leadership had gotten too cozy with a candidate for public office—Donald Trump?

“There was a lack of transparency there, they were saying publicly, ‘No, we’re not intertwined with this thing,’ but the editor-in-chief is off to write Trump’s speech at AIPAC,” Barkan responds.

“I think it comes down to transparency,” he continues, pointing out that Jimmy Breslin wrote a cover story for New York Magazine during his run for City Council Speaker, “a brilliantly written story about New York at its nadir that could only be written by someone who had been out in the street talking to voters.”

Isabel calls it a “tough decision” that ultimately boils down to the fundamental question publishers of all media, from career-ending exposés to clothes dryer self-destruction videos, must ask themselves: is it any good?

“I do think there is value to reporting insider knowledge, knowing how a politician comes to his or her conclusions, I think there is value in that,” Isabel says. “Does that value exceed the potential damage to the reputation and the ethical analysis of my publication if it appears I’m being impartial?”

Barkan says he has considered this.

Whether Gothamist will be running Barkan's work in the future is ultimately above my pay grade. Gothamist editor-in-chief John Del Signore says that at the very least he'll "happily consider Ross's dispatches from the campaign trail." Jake Dobkin, the Vice-President of Strategy and Expansion for DNAinfo-Gothamist, told me, “Stay tuned—we’ll be weighing carefully the ethical issues and the importance of each piece before we make a decision."

#journalism
#Politics
#ross barkan
#original
Do you know the scoop? Comment below or Send us a Tip