Our last dispatch on the electronic cigarette saga in January detailed an unregulated industry that was reveling in the twilight of a period of total freedom. E-cig companies could pay movie stars to puff their product on TV, and its packaging didn't have to list the types of fog juice and food additives users were putting in their blood. Many smokers who had trouble quitting with gums and patches became True Believers, though legally the e-cig companies couldn't talk about that. It was heady times in VapeTown, and it still is: the FDA has yet to issue a proposed rule regulating e-cigarettes that was anticipated in April, and yesterday the second-largest tobacco company in North America, which sells Camels and American Spirits, debuted an e-cig of their own.

According to Reynolds American's CEO Daniel Delen, the soul of his company's e-cigarette, Vuse, lies in the desire for the real thing. "I called some people into my office, and we got all our competitors' products and put them out on my desk and started trying them," Delen told reporters and industry types in a demo room at Chelsea Piers. "After a few puffs, we all wanted to go outside and have a cigarette."

Delen is from the Netherlands, but his slight accent reflects the time he spent in London, and he comfortably roamed the stage in a tan suit extolling the strength of his new product with emphatic clichés ("It's a product like no other, it's a game-changer") and confident business-speak ("We are well-positioned to own this category"). Tony Robbins on Tobacco Road.

But he shifts into scripted legalese when I ask him about how his company is preparing for potential FDA regulations: "We look forward to interacting with the FDA as they promulgate rules and regulations for the market...If anybody can meet product standards, we can."

FDA spokeswoman Jennifer Haliski confirmed that the proposed rule—which could stipulate a wide variety of regulations, from how much nicotine e-cigs can dispense, to what flavors can be sold, to whether they can be marketed on TV, etc.—had not been published yet because it was "still in process," and declined to elaborate on the delay.

Jeff Stier, who studies public health issues for The National Center for Public Policy Research, a conservative think tank, said he was impressed with the unveiling but acknowledged that it was "optimistic" of the Reynolds executives to think their product would escape FDA regulation relatively unscathed.

"Consumer demand drives innovation, but e-cigs are like a moving target—you want to meet consumer demand, but we just don't know what the FDA will do. We're in uncharted territory." Stier, whose think tank receives a small portion of its funding from Reynolds and other large tobacco companies, doesn't buy the argument that e-cigarettes could potentially start a whole new nicotine culture with kids who see smoke and think "cool."

"The irony is that a tobacco company is selling a product that could help more people effectively quit, and the government is standing in the way," Stier says, referencing the inability of e-cig companies to extoll the benefits of electronic cigarettes over traditional ones. "I believe the marketplace can do a better job than the government on the issue of public health."

Marketing e-cigarettes as a device to help you quit smoking requires costly testing and research as well as strict FDA regulation. A spokesman for NJOY, one of Vuse's largest competitors, told me in January that the company is "in the process of putting together the protocols and the process and the formats to do it." Vuse won't join them anytime soon.

"No sir," Daniel Herko, Reynold's senior VP of research and development said as he puffed on a Vuse. "We're not making any health claims."

Instead, Vuse will bombard print and television with the promise of "a perfect puff."

E-cigarettes are projected to subsume 1% of the cigarette market this year, or 2.4 billion cigarettes, up from 2012's half a percentage point, translating to around $1 billion in sales.

Vuse's biggest competitor in the market is Blu, the largest e-cigarette company in the country, which is owned by Lorillard, the maker of Newport cigarettes.

NJOY has built its brand on exactly replicating the cigarette experience, down to the faux yellow-flecked filter. Vuse sports a large chrome tube befitting the two "microchips" that are embedded in it.

Vuse is bulky, especially when compared to the size and weight of a disposable NJOY or a normal cigarette. It closely resembles the e-cigarettes that are preferred by the "vaping community," which favors cigar-like proportions over skinnier models. 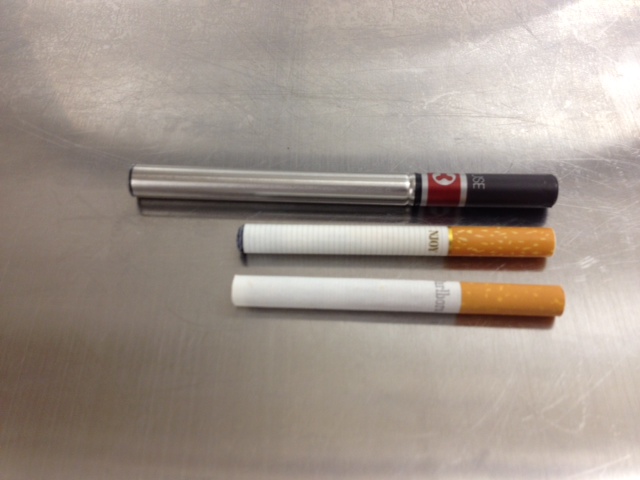 A Vuse (top) e-cig, compared with an NJOY and the real thing

It's unclear whether consumers will care about Vuse's SmartMemory™ microchip, which, according to the press kit, works "in tandem" with the VaporDelivery Processor to "monitor and continuously adjust the power and heat delivered to the Cartridge up to 2,000 times a second, ensuring consistently satisfying puffs."

A single rechargeable Vuse is $9.99, and its nicotine cartridges, equivalent to a pack apiece, cost $5.99 for two. This is cheaper over the long run than disposable models like NJOY, and Reynolds promises to recycle Vuse's lithium ion batteries for their customers, provided they drop them into a prepaid envelope and send them back to headquarters. Vuse will begin to be sold in Colorado, and other markets will soon follow.

Bonnie Herzog, the managing director for Wells Fargo's Beverage, Tobacco, and Consumer Research division, thinks this is exciting news for Reynolds and the tobacco industry. "We had an opportunity to try Vuse and were impressed with the draw and taste of the product," Herzog wrote in her report on a meeting with Reynolds executives. "We believe the broader expansion of the Vuse brand will draw further consumer interest in e-cigarettes overall and drive consumption of ecigs to overtake traditional cigs within the next decade."

In other words, e-cigs are the future, and the future looks profitable, especially when the government can't keep you from advertising on TV. Hello, Marlboro.

#e-cigarettes
#e-cigs
#smoking
#tobacco
#tobacco companies
#vuse
#original
Do you know the scoop? Comment below or Send us a Tip