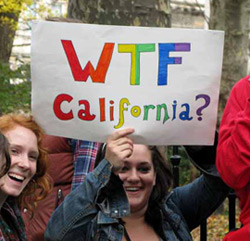 After earlier saying he would "defend the proposition as enacted by the people of California," California Attorney General Jerry Brown has asked the California State Supreme Courtto void Proposition 8, which bans same sex marriage. The L.A. Times reports that his brief, filed just under the deadline, declared "the amendment process cannot be used to extinguish fundamental constitutional rights without compelling justification."

Additionally, Brown argued that the state constitution's authors never intended "to put a group's right to enjoy liberty to a popular vote." Brown's "about-face" is considered surprising. Brown told the LA Times, "This analysis was not evident on the morning after the election," and that he and his staff came to it after weeks of discussions and examination of the California state constitution. In an interview with the SF Chronicle, he said, "We have a conflict between the amendment power (through voter initiatives) and the duty of the Supreme Court to protect minorities and safeguard liberty."

Prop 8 proponents, on the other hand, filed a lawsuit to nullify the over 18,000 same-sex marriages performed before Prop 8's passage. The Protect Marriage lawsuit, represented by Kenneth Starr (yes, thatKenneth Starr), says, "Proposition 8's brevity is matched by its clarity. There are no conditional clauses, exceptions, exemptions or exclusions"—as in no same-sex marriages should be recognized. However, Brown says the proposition was not written to be retroactive.

And gay marriage prospect in New York have been such a hot topic that it's apparently impacting the power struggle over State Senate leadership.

Photograph taken at the City Hall rally against Prop. 8 by alibee on Flickr

#california
#gay marriage
#prop 8
#proposition 8
#same sex marriage
Do you know the scoop? Comment below or Send us a Tip