Cabbie Who Killed Man Trying To Rape His Wife: "I Feel Bad... I Didn't Mean To Kill Anyone"

The Bronx man who killed an intruder who attempted to rape his wife is distraught over what happened. Mamadou Diallo, 61, said yesterday, "I’m not a hero. If anyone touches my family, I’m fighting for my family and myself, that’s it."

Still, Diallo is being cheered by neighbors and strangers for his actions on Monday night. Police say that he fatally beat Earl Nash, 43, with a tire iron after Nash apparently broke into Diallo's home at 1240 Washington Avenue in the Bronx and attacked his wife, Nenegale Diallo.

Nash had shoved his way into the home and, according to Nenegale Diallo, tore off her clothes and exposed himself. She recounted that he said, "I don't want anything. I don't want money. I'm going to rape you," and viciously beat her. At one point, she was able to open a door and tried to scream for help and, at another, she was able to break away to call her husband.

Mamadou Diallo returned to his apartment and found Nash in the hallway. Surveillance video shows Diallo striking Nash with a tire iron. It's believed Diallo's assault on Nash in the building's elevator lasted two minutes. Nash died, after suffering a fractured skull. 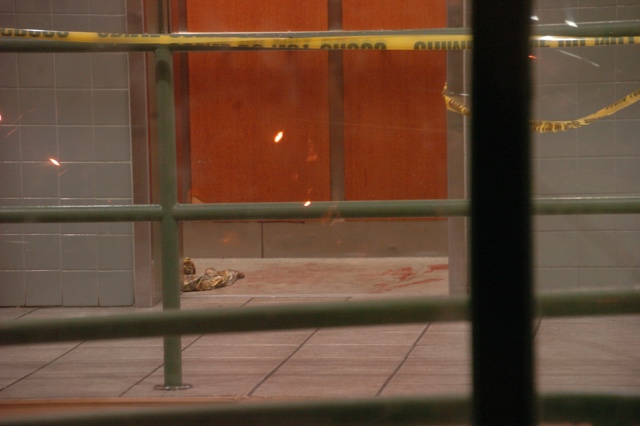 Yesterday, Diallo told the Post, "I didn’t mean to kill anyone,” he agonized. “I feel bad."

“I’m not happy because I know a man died and I know they put my name with somebody who died,” he said solemnly. “I do not want to kill that man.” The Guinea native added that he feels terrible about using a tire iron to batter Nash, though he believes his actions were justified and didn’t warrant criminal charges.

“I defended my wife because she was a victim,” Diallo said. “He hit her head, he take the clothes off my wife and try to rape her. I am not thinking [the police] are going to take me because someone came into my house, take my wife’s clothes off to rape my wife.”

that people have been offering support, including to pick up legal expenses, from around the country.

Diallo was initially charged with manslaughter, but charges were dropped to assault, harassment and criminal possession of a weapon. A defense attorney not involved with the case explained to CBS New York that the fact that Diallo was released without bail "tells me the court, that tells me the prosecution, and that tells me the police are all favoring Mr. Diallo at the present time," adding, "District attorneys, despite what they say they, pay attention to what’s in the press and what the public thinks is the right thing to do."

Former Manhattan DA's office prosecutor Robert Wallack offered a reason why Diallo should be prosecuted in the Post, "Condoning vigilantism would lead to the breakdown of the rule of law and risk starting a cycle of violence and lawlessness in which the victims of vigilantism take the law into their own hands to exact payback. The result is anarchy. Does this mean that Mamadou Diallo should be convicted? Not necessarily; that decision will ultimately be left to a judge, or to a jury of his peers. However, his arrest by the police was certainly proper, and the prosecutors’ decision to charge him for assault was the right one."

Infamous vigilante Bernard Goetz, who shot four black teenagers on a subway in 1984, approved of the killing, referring to Nash's criminal record of 19 arrests, including holding a teen age captive for two days, in an email to the Daily News, "Too bad somebody didn't kill the scumbag 10 years ago. That would have made the world a little better place."

#assault
#attempted rape
#bronx
#earl nash
#mamadou diallo
#manslaughter
Do you know the scoop? Comment below or Send us a Tip