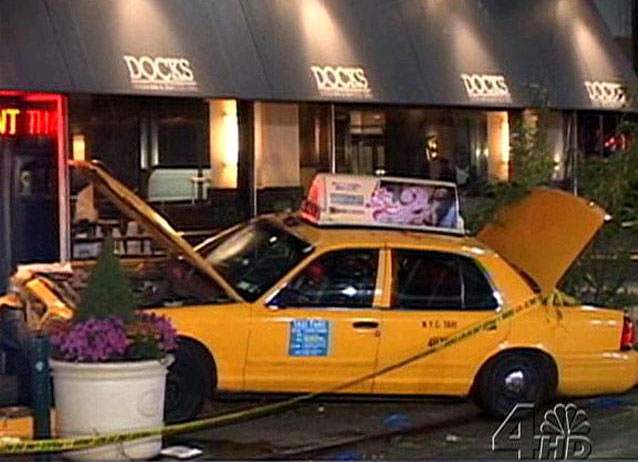 A former Channel 7 helicopter pilot was killed when an out-of-control taxi jumped a curb and hit him last night. Paul Smith and his family had just finished a birthday dinner at Dock's restaurant on Third Avenue at 40th Street. The cab had been speeding up Third Avenue when it suddenly jumped the curb and hit sidewalk planter, just when Smith and his family were leaving, and ended up pinning Smith underneath the cab.

The taxi driver was not charged with a crime yet, but it's unclear what caused him to lose control. An earlier report had suggested another car may have been speeding up Third Avenue as well, possibly causing the cab to swerve, but that has not been substantiated. There were many witnesses to the accident. One restaurant patron said, "It sounded like a huge car wreck. I looked out the window and I saw a guy on the ground. He looked dead. There was a lot of blood." Another said, "I saw the cab coming really fast. Fifty or 60 [mph] and then it came into the tree." 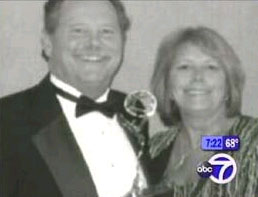 Smith was pronounced dead at Bellevue. WNBC reports that the 60-year-old Smith was the base manager for Helicopters Inc, which is "in charge of operations for all five of the major television station choppers." WABC 7 notes that Smith "had proven his skills on countless flights over collisions, blackouts and fires" and won an Emmy for covering the 2004 crash of WNBC's Chopper 4 in Brooklyn. He said on that day, "We all fly in close proximity and work well together, even though we compete. You want to be able to help, but you can't."

Smith's wife Donna is in stable condition at Bellevue Hospital. Their son Corey, a police officer, had received a medal from the NYPD, the day before.