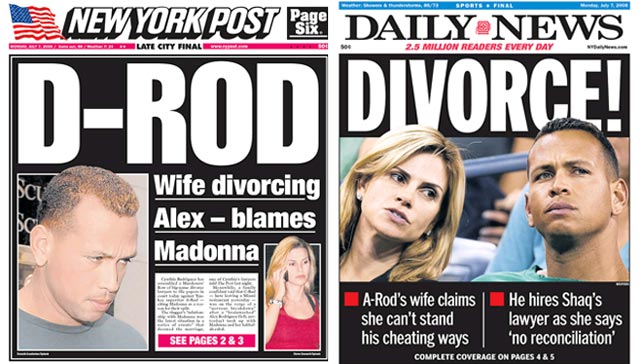 Cynthia Rodriguez filed for divorce from Yankees slugger Alex Rodriguez today in Miami. According to the papers, she claims A-Rod "emotionally abandoned" her and that the marriage is "irretrievably broken" due to his "extra-marital affairs and other marital misconduct." She is looking for primary custody of their two daughters, child support to "maintain the existing lifestyle of the children," and their $12 million home in Coral Gables, Florida, plus paying attorney's fees. Notably, she is also seeking "equitable distribution" of assets acquired during their marriage--how much of A-Rod's $275 million Yankees contract that includes will be up to the lawyers.

One of her lawyers, Earle Lilly told the Daily News, "She has reached the end of her ability to tolerate his continued marital misconduct...As a baseball player, the guy's terrific. This is the game of real life, and that's where he's not going to make the all-star team. As a parent and as a husband, he's not going to get voted in." 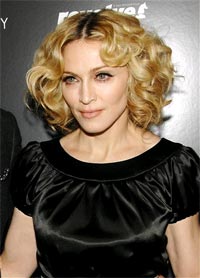 And another lawyer, Maurice Kutner, referred to both A-Rod alleged affair with Madonna and his relationship with a stripper when speaking to the Post, "It's huge, it's devastating, it's life-changing. It's caused her tremendous stress, and she's doing the best she can to deal with it."

As for Madonna, the supposed wedge in the Rodriguezes' marriage, the Material Girl issued a statement to People magazine saying:

"My husband and I are not planning on getting a divorce. I know Alex Rodriguez through Guy Oseary, who manages both of us. I brought my kids to a Yankee game. I am not romantically involved in any way with Alex Rodriguez. I have nothing to do with the state of his marriage or what spiritual path he may choose to study.”

“I have learned over the years not to take accusations and the many false reports about me very seriously. I also appreciate how fiction and fact seem to be perceived as one and the same by people who read both newspapers and the Internet."

Still, A-Rod's former trainer and friend (now on the side of C-Rod) believes Madonna used Kabbalah to lure the ball player.