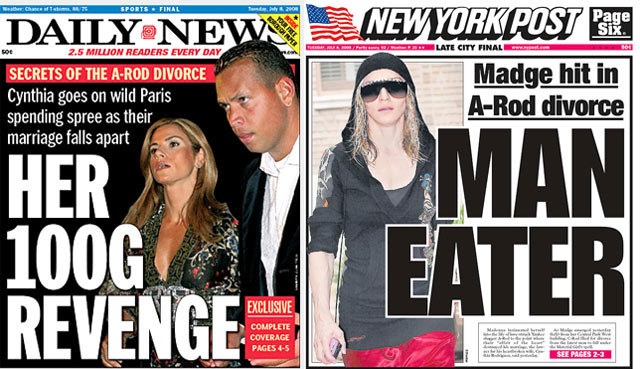 The breakup of Alex Rodriguez and Cynthia Rodrigeuz's marriage took another nasty turn after she filed for divorce yesterday. The Yankee third baseman's friends told the Daily News that C-Rod spent $100,000 during her trip to Paris. This comes as one of Cynthia Rodriguez's divorce lawyers called A-Rod's much-rumored affair with Madonna "an affair of the heart."

Friends for both sides of the couple have been trying to win over the public by leaking details. C-Rod's camp thinks A-Rod's friends were responsible for suggesting she and Lenny Kravitz (whose Parisian home she stayed in) were having an affair, while C-Rod's friends have been saying Madonna bewitched A-Rod with Kabbalah. Of C-Rod's stay in Paris, a friend of Alex Rodriguez told the Daily News she flew her friends first-class to stay with her and "had spa treatments...went to the best restaurants." Plus, the friend accused Cynthia of not letting A-Rod see his two daughters.

Cynthia Rodriguez's lawyer Earle Lilly said that his client is not trying to prove A-Rod had a sexual relationship with Madonna, "The correct analysis is a 'relationship.'...Some people categorize an affair as something as sexual infidelity. We're not claiming that," opting instead for "an affair of the heart." An affair of the heart--Madge, are you losing your touch?

Still, A-Rod's past dalliances with strippers are being brought up again and even Larry King found himself fascinated with the sordid affair, saying, "This is one of those stories that has everything -- a baseball star, singer, another singer, director. We could go on and on..." And he did, with divorce lawyers Neal Hersh, Raoul Felder, Dr. Drew Pinsky and Extra's Carlos Diaz.