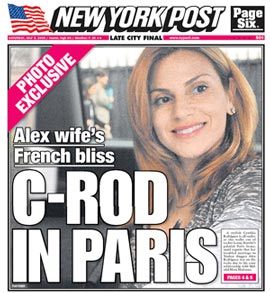 Maybe Cynthia Rodriguez did need a break. The Post spotted the long-suffering wife of Yankees All-Star Alex Rodriguez in the City of Light "beaming with smiles" and looking good, "wearing black, open-toed, high-heeled shoes, tight-fitting blue jeans and a gray hooded top." However, she was not wearing her engagement or anniversary rings.

Cynthia Rodriguez, aka C-Rod, has been staying at friend Lenny Kravitz's $10 million Parisian residence. Kravitz has denied that he is having an affair with the 34-year-old former psychology teacher, saying he is only giving her a place to get away from the scrutiny over her marriage (the whole, "Is A-Rod having an affair with Madonna" thing). According to the Post, C-Rod later headed to Kravitz's concert at The Zenith.

Her family told the Daily News Cynthia is "fine. She's a very strong woman." In fact, Cynthia's sister seemed to point the finger at Madonna for sabotaging the marraige, "She's probably capable of anything." Some other sources suggest that Madonna's manager, Guy Oseary, brought the the Material Girl and $275 million slugger together--Oseary also managed Kravitz up until two weeks ago--but Madonna's rep said, "Guy does not get involved in his clients' personal lives."

Boston Red Sox fans are loving this latest scandal for A-Rod (last year, they wore blond lady masks when A-Rod was linked to blond stripper), with some telling the Post, "He's a sad, pathetic human being whose only saving grace is that he is a decent ball player" and "He's probably the greatest baseball player I'll ever see in my lifetime, but he's all about himself. It goes along with his ego." A-Rod was 2 for 4 in yesterday's loss to the Red Sox, with two runs batted in.

#alex rodriguez
#celebrities
#Cynthia Rodriguez
#gossip
#Lenny Kravitz
#madonna
#paris
Do you know the scoop? Comment below or Send us a Tip