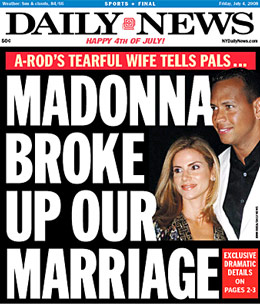 Cynthia Rodriguez might be the most suffering Yankee baseball wife these days (well, this side of Debbie Clemens). According to the Daily News, C-Rod told her friends Madonna is "using Kabbalah to brainwash Yankee star Alex Rodriguez into believing they are 'soulmates'."

A friend told the News Cynthia really believes A-Rod and Madonna are involved; C-Rod apparently said, "I feel like Madonna is using mind control over him. I don't recognize the man he's become. He was a sweet, beautiful, loving husband and father. Today he's very cold and calculating."

Cynthia Rodriguez, 34-year-old mother of two daughters with A-Rod, also thinks her husband's people tipped the paparazzi that she was in Paris and staying at Lenny Kravitz's apartment, spurring more rumors that he was involved in a love rectangle. According to C-Rod's friend, the Yankee superstar suggested she get away to Paris, "Why don't you stay with Lenny?"

Kravitz issued a statement saying he is not having an affair with Cynthia Rodriguez, "This is unequivocally, 100 percent not true ... I opened my home to her as a friend and I find it extremely hurtful that I am now being referred to as an adulterer... She came here to escape from everything happening in New York City" He added that she was at his home with her friends and their child.

While Cynthia's father told the Post, "We love Alex. Of course, we love our daughter. Hopefully, they will work things out. Marital issues happen in all walks of life," her mother said, "We've known about this for a long time. Everyone else is shocked, but we're not shocked." And it may be possible that the scandal helps A-Rod's stats.