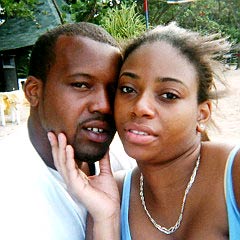 As the police try to reconstruct the events of Thursday night's mugging attack, a little more information is offered about some of those involved. Subway conductor Maurice Parks was walking home when he was attacked by a group of muggers in Harlem, at West 139th Street and St. Nicholas Avenue late Thursday night. When stabbed, Parks took out his own knife to defend himself. By the end, the police arrested a wounded attacker and another teen attacker, and found that a man who died in the clash was actually a bystander.

The family and colleagues of bystander Flonarza Byas (pictured, with his fiancee Stephanie Diaz) recounted how the 28-year-old was working hard to get ready for married life. Byas, who lived in a shelter temporarily (which is why he was initially described as homeless), had been working in the accounting department of a wig company; the controller told the Times their last conversation was the day before Byas died, "We were talking about the election and what was going on. He was a very astute young man." And he was taking a course to become a tax preparer for Liberty Tax Service, where a manager said, "He was a persistent young man determined to succeed."

Parks, an 39-year-old father of three, had trained in jujitsu and his nickname was "Super Weapon." The Daily News spoke to police sources who say that Parks "might have had the upper hand by the time Byas appeared, and that the good Samaritan might have gotten confused and attacked Parks."

Apparently the Manhattan DA's office is considering bringing charges against Parks, but State Senator Eric Adams, a former police officer, said the muggers should be the ones charged. World Martial Arts Center's Master lil John Davis said, "[Parks] didn't go out looking for trouble. [His attackers] did a bad thing, and they paid a hard price." 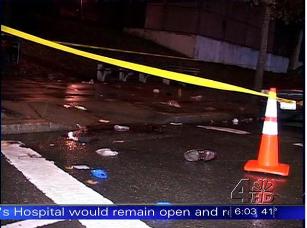 Byas' relatives and fiancee believe that he was killed when he tried to help (the police aren't sure of his role). His brother said his family will forgive Parks "if it was an accident." Brother Jeovanni Byas told the Post, "We are a forgiving family. It was not in [Parks'] hands what to do at this point."

The NYPD emphasized that Parks, who is still at Harlem Hospital recovering from his injuries, had not been charged, but also revealed that Parks had applied to join the NYPD in 1992, 1993 and 1999, but had been rejected all times. The police wouldn't explain why Parks had been rejected. A friend of Parks said that as far as he knew, Parks had only applied once before and a previous 1994 incident where Parks had been mugged and defended himself to the point of killing the attacker was what prohibited him from joining the police force.

The friend also said Parks thought there were more than four attackers involved. The police are looking for a third attacker who ran away from the scene.