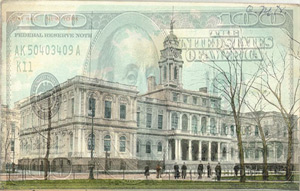 A lawsuit filed Monday against the City Campaign Finance Board seeks to overturn a recently enacted funding law that opponents assert will just make the City Council richer - and whiter. The recently-enacted campaign finance restrictions reduces the contributions from companies who do business with the city by a whopping 92%. Translation: In a mayoral race, the individual limit on giving is now $400, versus $4,950; in City Council races, it's $250, down from $2,950.

The suit is financially backed by a group of real estate and business interests who usually donate millions of dollars to candidates every election season, and the 13 plaintiffs include one African American and four Hispanics, as well as former City Council minority leader Tom Ognibene, the NY York State Conservative Party and the Kings County Conservative Party

James Bopp Jr., the GOP attorney who got the Supreme Court to toss Vermont's campaign finance restrictions two years ago, filed the lawsuit. Bopp explained the logic behind the suit to the NY Times:

“When minority candidates run, their natural constituency is their neighborhoods and their neighbors. And the unfortunate reality is that the minority population is on average in the lower socioeconomic level and less able to contribute, so minority candidates have to rely — I am told by activists here, consultants — that they tend to rely disproportionately on contributions from outside of their district, and in particular, business interests. So that this would disproportionately affect them.”

Bopp also argued that the restrictions don't affect contributions from unions or community groups. However, Columbia law professor and campaign finance expert Richard Briffault said the law will "affect everybody" and said that there's no evidence minorities depend on lobbyist donations more than their white counterparts.

Council Speaker Christine Quinn has also countered that the new rules will help all candidates who can't afford access to high-powered lobbyists and developers. Mayor Bloomberg also supports the new restrictions on fund raising, which strikes us as pretty rich.