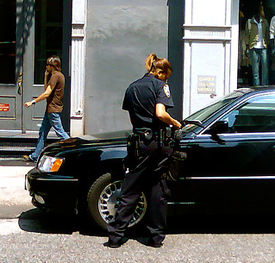 Don't think for a second that Margaret Arrighi, head of the Bronx Business Alliance, lives in New York City—to her it's the Serengeti, and the traffic agents are the bloodthirsty predators: "They wait for you to park. They come up from behind, like a tiger waiting for its prey. They snap the machine and the ticket has begun to be written. Instead of tapping on the window, instead of asking you to move, they say, ‘Don’t move the car.’ " Arrighi and other Bronx merchants are pressuring local officials to do something about what they say is an excessive amount of parking tickets being issued in the Bronx, driving away their customers.

The parking ticket backlash got a boost last May when 64-year-old Leo Magnotta suffered a heart attack while arguing with traffic cops as they wrote him a ticket for double-parking. (He had been waiting in the car for his wife outside a Subway sandwich shop on Tremont Avenue.) According to the Daily News, a Bronx funeral procession was also issued parking tickets two years ago. And last June, State Senator Jeff Klein issued a report indicating that some Bronx neighborhoods get a disproportionate number of parking tickets.

The business owners are now demanding a meeting with traffic agent supervisors, an investigation into the issuing of illegal parking tickets, and a "grace period" for community members. Bronx City Councilman Jimmy Vacca says he too has spoken out about these "abuses." He wants more traffic enforcement agents devoted to directing traffic instead of issuing tickets, as they do in Manhattan. Vacca tells the Daily News, "I've always questioned whether our priority in traffic enforcement is safety or revenue enhancement."