Bushwick Woman Fights Gentrification With Christmas Lights: "Your Luxury Is Our Displacement"

It's no secret that Bushwick's been fiercely gentrifying for some time now, having won the approval of both Vogue and SantaCon organizers over the years. But one lifelong resident is so sick of watching developers try to push her and her neighbors out that she's decided to wage war with the visual power of Christmas lights.

DNAinfo reported on the efforts of one Pati Rodriguez, who has lived most of her 33 years in a house on Greene Avenue. Rodriguez says she's been inundated with calls from developers who've been trying to purchase her home, presumably to turn it into an overpriced condo building complete with an offensive name. Fellow community members, she says, have suffered the same, and she's over it—she's enlisted a number of long-time residents, including homeowners, tenants and small business owners, in hanging up anti-gentrification signs lit with Christmas lights outside their homes and establishments. 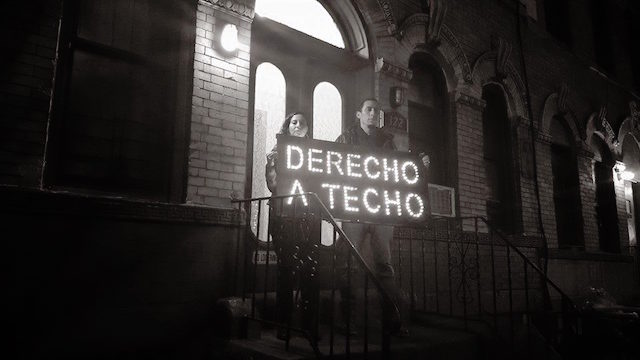 "We've been living in our home here in Bushwick since I was eight or 9 years old. My mother has been receiving letters from real estate developers for the last eight years," Rodriguez told us. "They're calling her at work to get her to sell her house, but where are we going to go? We understand that land is power, we don't want to sell our home."

Rodriguez, who is an active member of the Mayday Space artist collective in Bushwick, began collecting some of the flyers and letters from developers, initially planning to make a collage to post outside her home. "It was just going to be a piece I was going to do with my daughter," she said. But other activists and community members expressed interest, and Rodriguez ended up getting connected with the NYC Light Brigade, who've been involved in a number of protest projects in the city, and came up with the idea for the lights as a form of protest. The project is dubbed Mi Casa No Es Su Casa. 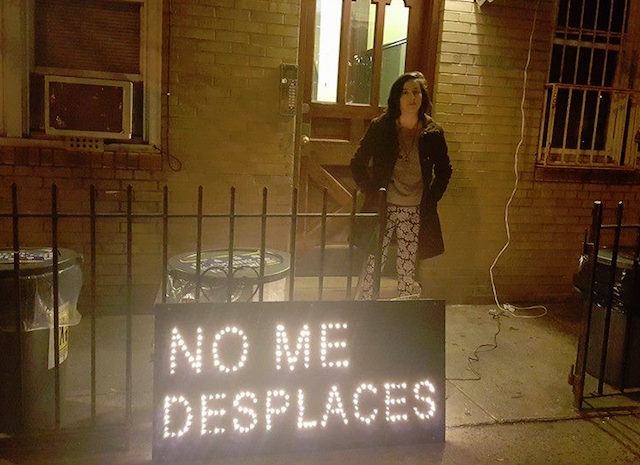 About two businesses and about 15 households posted lights with anti-gentrification messages outside their homes, and though Rodriguez says some were uncomfortable about keeping them up for more than a day out of fear of angering landlords, Rodriguez says this is just the beginning. The group plans to film testimonials featuring individuals who are being displaced, for instance, and more projects are up ahead. "They're trying to drive us all out," she said, referring to developers. "Poor people are being driven out of all the boroughs of New York City, we're just one of the first places that was hit hard a few years ago."

And though Rodriguez says they're not specifically targeting gentrifiers—"We're attacking the developers, we're attacking the people who are coming here to flip our houses," she said—she does hope the project reminds moneyed newcomers to the neighborhood that their arrival has real side-effects. "Because you're willing to pay these higher rents, we're getting displaced," she said. "Your luxury is our displacement."