For much of the last two years, Brooklyn's cyclist community has worked alongside the Department of Transportation on strategies to encourage bike commuting during the L train shutdown. That planning—which coincided with a $100 million investment from new Citi Bike owner Lyft in November—was set to bring about the mass deployment of pedal-assist e-bikes and valet stations within the L train corridor, creating a Manhattan-bound "shuttle service" while expanding bike-share in Williamsburg and points east.

Now there are no L train shutdown plans, and no pedal-assist e-bikes for the foreseeable future. But there is still a commitment to expand Citi Bike to Bushwick, with a DOT assurance last month that it will get done in time for the start of the new L train project on April 27th.

And two of these new stations are already active and shown on the map -- Stagg & Morgan and White & Moore. pic.twitter.com/Pnyiq0HZpl

Beginning this week, those long-awaited stations are finally becoming a reality. Yesterday, a sharp-eyed Brooklynite spotted two brand new stations in East Williamsburg and one on Wilson Avenue in Bushwick. On Tuesday morning, a second Bushwick station materialized at Jefferson and Irving Avenues (it's not yet live, as of 11 a.m.).

Several more stations are coming, possibly as soon as today. A DOT draft plan prepared last week shows the location of a dozen more sidewalk and roadbed stations soon-to-land in Bushwick, along with nine other new stations in East Williamsburg. A DOT spokesperson confirmed those installations will continue into May—suggesting that April 27 may no longer be a hard deadline—though a spokesperson for Lyft tells Gothamist they're aiming to get it done by the end of the month. In total, the 25 new stations will have 579 docking points. 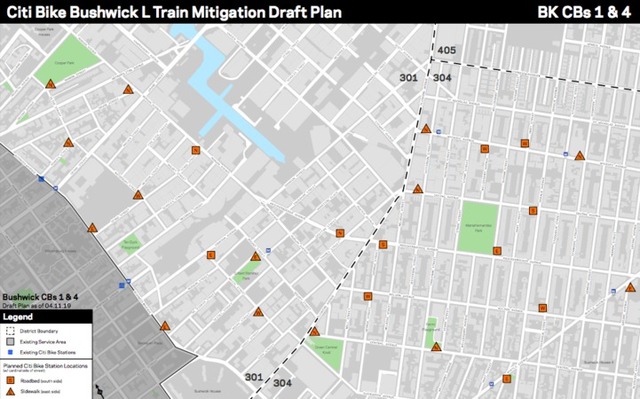 The draft plan as of April 11th. Find a high-resolution map here (DOT)

Given the mandate to expand the system ahead of the L train shutdown, the siting seems to make sense. Those most impacted by the slowdown have access to four stations on Wyckoff Avenue, and there are docking options at both the Central and Knickerbocker Avenue M stops. Asked about bringing valet stations at the subway transfer point, the Lyft spokesperson said they were still finalizing those plans. There's also a roadbed station just outside Maria Hernandez Park, in line with a City Council directive to increase bike-share access in parks.

Theoretically, this could be the start of that "dramatic expansion" promised as part of Lyft's commitment to doubling Citi Bike's service area and more than tripling its fleet in the next five years. Frustratingly, however, the number of available working bikes hasn't budged since that November announcement. In fact, the total number of bikes on the ground remains consistently below the 12,000 bike mark that the company is supposed to maintain to keep its monopoly. Meanwhile, Lyft has declined to share details about its future expansion plans.

For the moment, at least, watching Citi Bike finally pierce the iron curtain that is Flushing Avenue is pretty damn satisfying. There's no reason other boundary areas—Crown Heights, Ridgewood, Sunnyside, Woodside, Jackson Heights, every neighborhood adjacent to Prospect Park's lower half, etc.—shouldn't get that same satisfaction, and soon.

#bikeshare
#bushwick
#citi bike
#dot
#east williamsburg
#l train
#we the commuters
Do you know the scoop? Comment below or Send us a Tip