More than 100 Bushwick residents and advocates crammed into Cathedral of Joy Church of God on George Street last night to demand that developers of a proposed luxury apartment building—rendered to include a dog run, hiking course, fire pit and graffiti wall—provide 30% affordable units to low-income neighbors, in addition to sustainable jobs, and funding for two local elementary schools.

The meeting felt like déjà vu for many residents, who spent months wringing these same promises out of the address's first developer, Read Property Group (you might known them as the ones who sold 1209 Dekalb Avenue to Bushwick's colonizers), back in 2013. Read sold a portion of the land to Rabsky Group last fall, and the new developers have refused to sign off on Read's commitments—to which they have no legal obligation.

"A developer's word isn't worth so much," said Bruno Daniel of the neighborhood advocacy group Rheingold Construction Committee (RCC). "Read told us they weren't going to sell the land, and they did."

The proposed luxury building at 10 Montieth Street is part of the former Rheingold Brewery site, a weedy, 6.4 acre industrial lot spanning 10 blocks near the intersection of Bushwick and Flushing Avenues. The neighborhood has changed considerably in recent years, with the addition of bars like Forrest Point and hipster wonderlands like the nearby CastleBraid. The City Planning Commission initially okayed Read to build 977 apartments across two towers, 24% of them "affordable" at 60% of the AMI, or $51,780 for a family of four.

Martin Needleman, an attorney with Brooklyn Legal Services who is working with the RCC, believes that this zoning would not have been approved if Read hadn't made so many lofty promises to the neighborhood. "Councilmember Antonio Reynoso would not have approved the rezoning without the support of the community," he said.

Read's good-faith agreement promised 30% affordable units (including a percentage reserved specifically for seniors), plus $250,000 for non-profit legal services, and additional funding for gardens and computer labs at two local public schools. Then there was the promised $75,000 for a jobs training program for locals; 50% rental preference for North Bushwick residents; and $350,000 for renovations at nearby Green Knoll Park. Now residents don't know where to turn to make sure that these promises are kept—towards Read, or towards Rabsky. 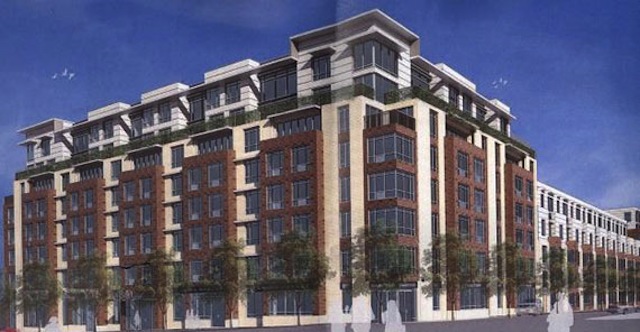 Read Property Group's proposal for the Rheingold site, approved by the city in 2013 (via)

Read sold a portion of the Rheingold site to Simon Dushinsky of Rabsky Group for $53 million last October. Renderings for Dushinksy's proposed six-story, 370-unit building, which has been called a "playground for hipsters" include 25,500 square feet of green space on a zigzagging roof. According to architect ODA, the roof will have a running and hiking course, plus plots for farming, and bocce courts. The building will also have a library, climbing wall, and co-working spaces lining the central courtyard. Zoning documents approved by the DOB this June do not include plans for any affordable housing.

Meanwhile, according to a spokesman from Councilmember Reynoso's office, the median household income in Bushwick is $36,500, and 30% of residents live below the poverty line.

Bushwick is 65% latino, but every person depicted in ODA's renderings is white. "This is what they think people look like in Bushwick!" said Jesus Gonzalez of Churches United for Fair Housing. 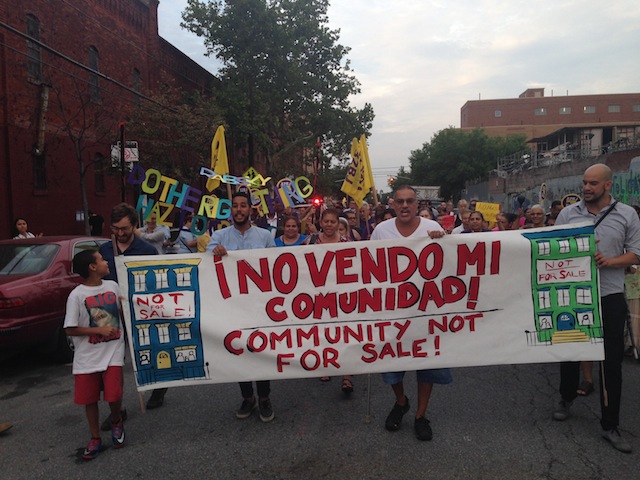 "It doesn't fit the landscape," said Bianca Perez, 21, of the Rabsky design. She has lived in Bushwick her whole life, and has spent the last few years helping her Spanish-speaking mother fight eviction from a nearby stabilized apartment. "It exacerbates things further. There is a lot of fear in the neighborhood, among people who don't speak much English." As rents inevitably increase, "How do they battle the monster of the legal system?"

Debra Medina, a lead organizer for South Williamsburg affordable housing nonprofit Los Sures, said, "For Rabsky to come and just move right in, and not even sit with us, it's really scary." She added, "I've lived my whole life in South Williamsburg. Many of our people from the south side have been displaced here to the Bushwick area, and now they are being displaced again." 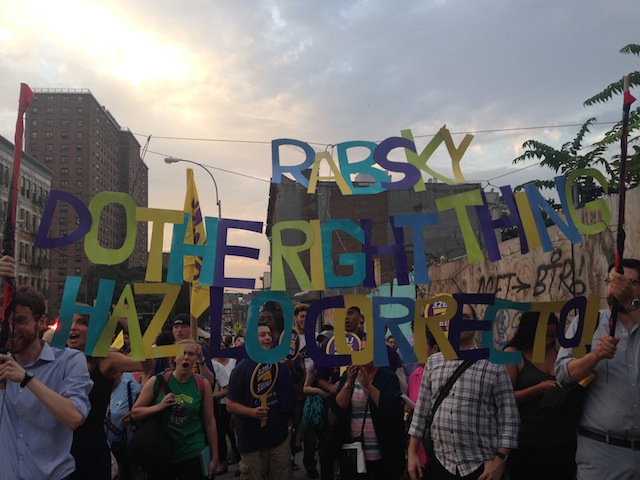 Protestors outside of the Rheingold site last night (Emma Whitford/Gothamist)

"As a group, we've never met the principal owner of Rabsky," said Daniel.

Dushinsky did meet briefly with Councilmember Reynoso in May, but in June he sent a representative to speak with the Committee on his behalf. The rep, according to Daniel, "wasn't empowered to make any decisions."

Rabsky Group told the Real Deal in June, "The project is privately funded and there is no affordable requirement. However, from the get-go, we had every intention to build affordable and we are committed to that." How many affordable units Rabsky has planned, much less how the developer plans to price them, is unclear.

Last night's meeting concluded with a police-escorted march to 10 Montieth Street. As the crowd gathered in front of the empty lot, Councilmember Reynoso held up a letter that had been passed to him during the meeting—by a Rabsky rep. "What they are saying is they want to come and meet with us now!" he said. "The people have power!" According to the letter:

Recent reports in the media and in the announcement for tonight's meeting and march imply that the commitment to construct affordable housing made during the Rheingold rezoning process will not be honored by the Rabsky Group. These implications are untrue... The Rabsky Group reiterates that commitment to affordable housing now to hopefully put to rest statements to the contrary.

"I just want to be clear, that's 1%," Reynoso said. "We have 99% to go. We want to make sure that they comply with everything that they're supposed to. We're not re-negotiating. Until they agree, this letter means nothing to me."

11-year-old Erica Carra lives a few blocks from the proposed development, with her mom and three sisters. Asked what brought her to the rally, Carra explained that her landlord is "offering money." She added, "He calls us all the time. He renovated the whole building, but not our apartment. Everyone has moved out except for our family, and the apartment next door."