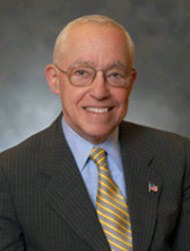 In the wake of U.S. Attorney General Alberto Gonzales's resignation last month, President Bush will nominate former U.S. District Court Judge Michael Mukasey for the position. Mukasey, who was born in the Bronx and educated at Columbia and Yale Law School, was "appointed to the federal bench" by Ronald Reagan and has presided over terrorism trials, such as the trial of Sheik Omar Abdel-Rahman.

He is also a friend of former Mayor Rudy Giuliani (he swore in the former mayor); the Daily News reports that he's also a "legal adviser" to Giuliani's presidential campaign. The NY Times described Mukasey's appeal to Bush:

Unlike Mr. Gonzales, Mr. Mukasey is not a close confidant of the president. Nor is he a Washington insider. But people in both political parties say he possesses the two qualities that Mr. Bush has been looking for in a nominee: a law-and-order sensibility that dovetails with the president’s agenda for the fight against terror, and the potential to avoid a bruising confirmation battle with the Democrats who now run the Senate. With 16 months left in office, Mr. Bush can ill afford a drawn-out confirmation fight.

Senator Chuck Schumer, severe critic of Alberto Gonzales, gave his tacit approval, saying, "While he is certainly conservative, Judge Mukasey seems to be the kind of nominee who would put rule of law first and show independence from the White House, our most important criteria."

The Sun points out that Mukasey had been passed over for five vacancies to the 2nd Circuit U.S. Court of Appeals during Bush's presidency, suggesting "he lacked significant political pull in Washington." Political pull is nothing like Benjamins, though. After retiring from the bench last year, the Wall Street Journal's Law Blog explained that Mukasey's white shoe law law firm Patterson Belknap Webb & Tyler salary could be as much as $1 million (his salary as a judge was $167,000).

The Law Blog asked Mukasey's son Marc, a former Southern District prosecutor who now works at Bracewell & Giuliani, "why he wasn’t able to recruit his pops to come work with him," to which the younger Mukasey said, "I’m tired of my dad riding my coattails. He’s going to have to make it on his own.”