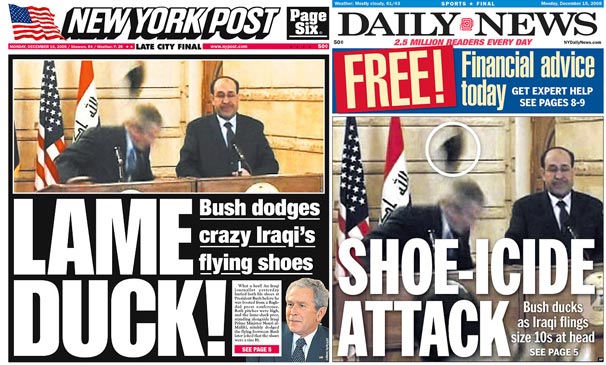 Naturally the double shoe-throwing attack that put President Bush under siege during a press conference in Iraq is a gold mine for the tabloids. The Daily News explains that when Muntather al-Zaidi threw the first shoe, he yelled, "This is a gift from the Iraqis. This is the farewell kiss, you dog!" And, casting the second shoe, Zaidi said, "This is from the widows, the orphans and those who were killed in Iraq."

Shoe throwing is considered the most extreme way to express disdain for another in Iraqi culture: Per the NY Times, "It means that the target is even lower than the shoe, which is always on the ground and dirty." Zaidi, a journalist for TV station Al Baghdadia, was "subdued" by the Secret Service and Iraqi security agents, according to the Post, which also reports, "They wrestled him to the ground and dragged him out of the room as he moaned and screamed. A trail of fresh blood could be seen on the carpet." The NY Times's Baghdad Bureau blog has video that offers some of the chaos with agents apprehending Zaidi.

Also from the Times Baghdad Bureau:

Maythem al-Zaidi said his brother had not planned to throw his shoes prior to Sunday. “He was provoked when Mr. Bush said [during the news conference] this is his farewell gift to the Iraqi people,” he said. A colleague of Muntader al-Zaidi’s at al-Baghdadiya satellite channel, however, said the correspondent had been “planning for this from a long time. He told me that his dream is to hit Bush with shoes,” said the man, who would not give his name.

Zaidi is currently in custody; various groups, including Baghdadia TV, are demanding his release. And while Bush was not hurt, apparently White House spokeswoman Dana Perino was hit in the eye by a mic stand.

#iraq
#Iraqi war
#president bush
#shoe
#shoe throwing
Do you know the scoop? Comment below or Send us a Tip