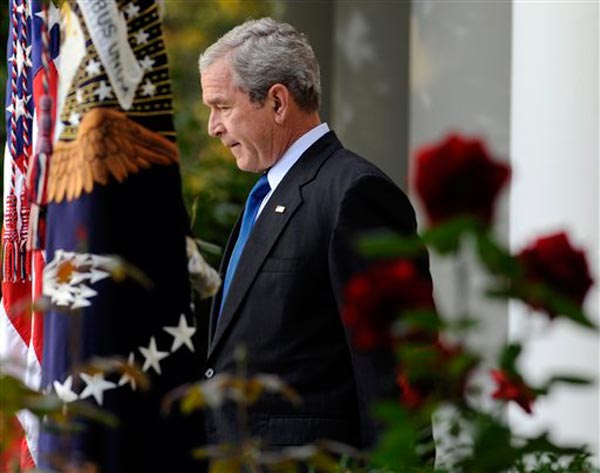 This morning, President Bush announced that the Treasury Department would take a $250 billion stake in U.S. banks. The money comes from the $700 billion bailout plan, which originally did not include any bank investment. USA Today reports, "The government will temporarily guarantee new loans between banks and offer to insure unlimited deposits in accounts that don't pay interest, such as checking accounts. The new guarantee goes beyond the $250,000 federal insurance that generally applies to bank deposits." (More on the FDIC's temporary liquidity program.)

The investment plan was explained yesterday to nine banks by Treasury Secretary Henry Paulson. the NY Times reports, "He essentially told the participants that they would have to accept government investment for the good of the American financial system." $125 billion will be injected into Citigroup ($25 billion), Bank of America ($25B), JPMorgan Chase ($25B), Wells Fargo ($25B), Goldman Sachs ($10B), Morgan Stanley ($10B), Bank of NY ($2-3B), and State Street ($2-3B), and the other half will go to smaller banks. The Wall Street Journal reports "some of the big banks were unhappy."

Bush said of the investment:

This new capital will help healthy banks continue making loans to businesses and consumers. And this new capital will help struggling banks fill the hole created by losses during the financial crisis, so they can resume lending and help spur job creation and economic growth. This is an essential short-term measure to ensure the viability of America's banking system. And the program is carefully designed to encourage banks to buy these shares back from the government when the markets stabilize and they can raise capital from private investors.

He added, "It will take time for our efforts to have their full impact, but the American people can have confidence about our long-term economic future," and promised "we will return our economies to the path of growth and prosperity."

Other officials are currently giving further details about the plan. Wall Street, which rallied 11% yesterday after a dismal week, may be set for another one today, as Asian and European markets continued their climbs.

#bailout plan
#bank investment
#economy
#president bush
Do you know the scoop? Comment below or Send us a Tip
A new Gothamist is coming! We’ve moved comments over to our beta site. Click here to join the conversation and get a preview of our new website.