Bush, The Decider, Says He Was An Iraq War Dissenter 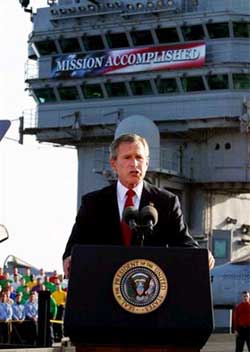 There's been a lot of confusion about George W. Bush's role in launching our $845 billion adventure in Iraq, but the misunderestistanding will finally be cleared up tonight, when NBC airs Matt Lauer's interview with the 43rd president, who's making an impressive publicity tour to promote his memoir Decision Points. In the interview, the former Commander-in-Chief clears the air once and for all about the ramp-up to Operation Iraqi Freedom. "I was a dissenting voice," explains Bush. "I didn't want to use force. I mean force is the last option for a President. And I think it's clear in the book that I gave diplomacy every chance to work."

The former commander in chief added, "I will also tell you the world's better off without somehow [sic] in power. And so are 25 million Iraqis." Bush's efforts to find a diplomatic solution may be obvious in Bush's book, but what does that pesky reality-based Book of Facts say? Not having read the memoir, which comes out tomorrow, one can only speculate about when exactly Bush dissented from the Cheney/Rumsfeld/Wolfowitz warmongering...because it must have happened sometime before:

Well, whenever Bush dissented, it wouldn't have made a difference anyway because the Commander-in-Chief could have just overruled him. In the end, you've got to feel for the guy: To be President is to be impotent!

Ultimately, only a narcissistic celebrity had the power to seriously wound Bush. Kanye West famously shocked the world by saying during a Hurricane Katrina fundraising telethon, "George Bush doesn't care about black people" and he's shocked the world once again by apparently being one of the lowest points of Bush's presidency. But now the rapper wants to help rehabilitate Dubya's legacy: West says he now sympathizes with how his criticism stung Bush at the time. "I really more connect with him just on a humanitarian level,"he told a Houston radio station last week. Clearly, Obama needs to send Kanye on a humanitarian mission to rescue Bush from the exclusive Dallas suburb where he ekes out a desperate, lonely existence.