Bush: McCain is "Exactly What We Need in a President" 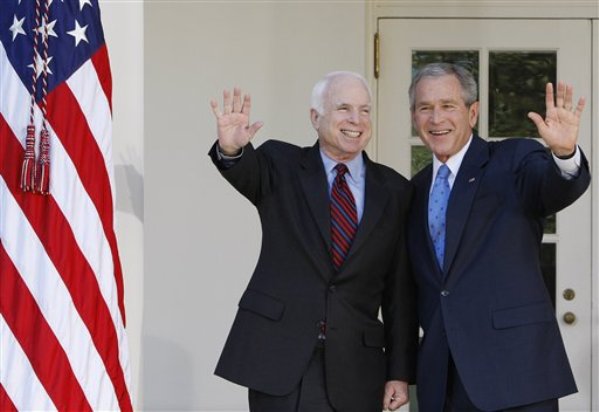 Yesterday, Senator John McCain was welcomed and endorsed by President Bush. Bush referenced McCain's doubters and past history, "John showed incredible courage and strength of character and perseverance in order to get to this moment. And that's exactly what we need in a President: somebody that can handle the tough decisions; somebody who won't flinch in the face of danger."

Reporters asked Bush, "How would you counsel Senator McCain to choose a running mate, how quickly? And given the fact that Democrats will field a nominee who will make some kind of history -- a woman, an African American -- should Republicans consider that in selecting a Vice Presidential nominee?" To which Bush replied, "I'd tell him to be careful about who he names to be the head of the selection committee." (Bush's VP selection committee head was Dick Cheney.) Fun note: McCain was late to the endorsement press conference, leaving the president to do a tap dance (literally).

Bush also called the other Republican candidates, including Mike Huckabee, Mitt Romney, and Rudy Giuliani, to thank them for running good campaigns. Some speculation puts some of those rivals in a hypothetical McCain cabinet, but would Giuliani really want to be homeland security secretary?

And a Washington Post-ABC News poll shows Obama and Clinton both lead over McCain in a national poll. Obama has a 12 point lead over McCain, while Clinton has a 6 point lead, thanks to voters who disapprove of the war and President Bush.