Bush Boosts Bailout, Deal May Be Near 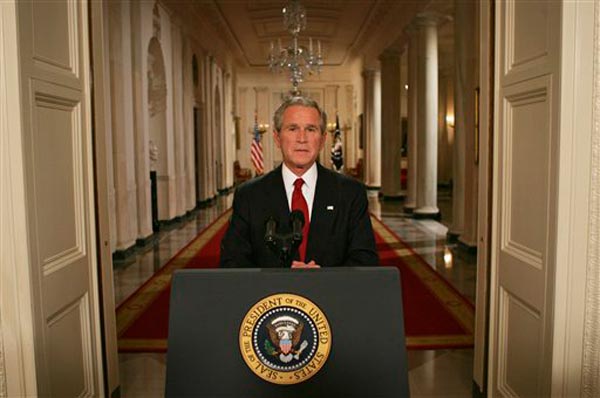 President George W. Bush faced the nation and essentially begged the public, who has been opposed to the government's proposed $700 billion bailout plan for financial institutions, to support the program. And Bush also tried to scare the public:

The government's top economic experts warn that without immediate action by Congress, America could slip into a financial panic, and a distressing scenario would unfold:

More banks could fail, including some in your community. The stock market would drop even more, which would reduce the value of your retirement account. The value of your home could plummet. Foreclosures would rise dramatically. And if you own a business or a farm, you would find it harder and more expensive to get credit. More businesses would close their doors, and millions of Americans could lose their jobs. Even if you have good credit history, it would be more difficult for you to get the loans you need to buy a car or send your children to college. And ultimately, our country could experience a long and painful recession.

Entire transcript here. That pro-Obama organization, the NY Times, offers a withering editorial, "In the end, Mr. Bush’s appearance was just another reminder of something that has been worrying us throughout this crisis: the absence of any real national leadership, including on the campaign trail." (Okay, McCain campaign--you win, the Times writes, "Mr. McCain is doing distinctly worse than Mr. Obama.")

The Wall Street Journal has an editorial, saying it was "mystified" by McCain's campaign suspension and debate postponement suggestion, "Last we checked, the President of the United States was still George W. Bush, the Secretary of the Treasury was still Henry Paulson, the Chairman of the Federal Reserve was still Ben Bernanke, and Congress still had 533 members not running for President who are at least nominally competent to debate and pass legislation." (The WSJ also questioned Obama's joint-statement idea.)

At any rate, Representative Paul Kanjorski (D-Pennsylvania) tells CNBC a deal on the bailout is nearly a "done deal"--heck, even stocks opened higher amid hopes the plan will be passed soon. Wonder what Bush will discuss with McCain and Obama during their afternoon meeting.

#bailout
#barack obama
#economy
#john mccain
#president bush
Do you know the scoop? Comment below or Send us a Tip
A new Gothamist is coming! We’ve moved comments over to our beta site. Click here to join the conversation and get a preview of our new website.