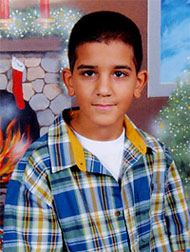 A fourth grader was hit by a commuter bus in the Bronx yesterday as he tried to cross a four-lane street on his way to school. The Daily News reports that Eliseo Oler, 10, suffered head injuries, a broken right shoulder and broken ribs and is in critical condition at NY-Presbyterian Columbia. And his mother blames the Department of Education, saying, "If they hadn't taken him off the bus, none of this would've happened. I told the principal, how could you make a 10-year-old child take the [city] bus to school?"

Oler's mother is referring to the controversial school bus reorganization that occurred in January, eliminating some routes while complicating others. His mother, Miriam DeJesus, explained what had changed:

The yellow bus had picked Eliseo up just around the corner from his Grand Concourse home, his mother said.

But in October, DeJesus was told her son lived too close to PS 95 for yellow bus service and instead qualified for a half-fare MetroCard. After that, Eliseo had to walk three blocks to a city bus stop and cross the busy intersection of Jerome Ave. and Mosholu Parkway South.

DeJesus, a mother of four who works the overnight shift for UPS, said she cannot walk with her son.

The DOE, though, says that Oler was never signed up for yellow bus service and probably just got on with other kids; the DOE adds that DeJesus never asked for a variance, "an option available if a parent disagrees with a decision." Oh, please, as if the DOE pays attention to every variance.