The verdict was given by Judge Heidi Cesare from the bench after a trial that lasted more than two days.

The Manhattan DA's office offered Lewis a plea deal that would have handed him a $1,000 fine, driver remediation classes, and a six month license suspension, but he chose not to take it.

Lewis will be sentenced on October 22nd, and he now faces up to 30 days in jail. Marco Conner, the Legal & Legislative Director of Transportation Alternatives, told Gothamist that he's not aware of any driver who's spent time in jail after being found guilty of the Right of Way Law. The criminal statute, passed as part of a package of Vision Zero laws in 2014, has led to 22 convictions in Manhattan, according to a spokesperson for the Manhattan District Attorneys office. It's unclear if any of those convictions have resulted in jail time. 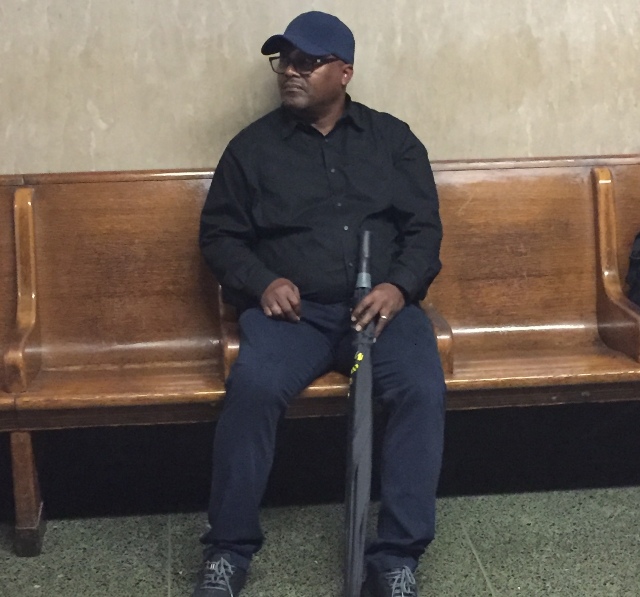 In closing arguments on Monday, Lewis’s attorney, Jeremy Saland, claimed that Hanegby was “oblivious” to the bus behind him “and lost control of the bike.” He added that the detective who was overseeing the investigation at the scene allowed Lewis to walk off the scene, because “to him this was just an accident.”

The prosecution countered that Lewis had failed to exercise caution, and that he “thought the cyclist should move over, not that he should slow down.”

In her closing statement, Manhattan Assistant District Attorney Raffaela Belizaire highlighted testimony offered by key witness Lanette Perez, a passenger on the bus at the time of the collision: “Where does he want the cyclist to go? We were just too close to him. If I reached out me arm I could probably touch him.”

Video evidence shown at the trial showed Lewis striking Hanegby as he passed the cyclist, who was biking next to a parked car on West 26th Street.

Warning: the video below is graphic.

Lewis's attorneys and Hanegby's family both declined to comment after the verdict. Paul Steely White, executive director of Transportation Alternatives, said that the conviction provided a "measure of justice," while noting that such a conviction is far from the norm.

"Drivers are rarely held accountable for recklessly taking lives on New York City streets," he said. "All too often, police hastily exonerate drivers while erroneously blaming bicyclists and pedestrians for their own deaths. We implore Commissioner O'Neill to bring an end to this habit of victim blaming and urge him to ensure that officers wait to comment on traffic crashes until after thorough and professional investigations have been completed."