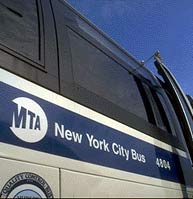 A federal judge is allowing a NYC bus driver to sue the New York City Transit over harassment he received at the hands of fellow workers. Mathen George, a bus driver since 1987 and was born in India, claims that after September 11, 2001, colleagues called him "Bin Laden," "Saddam Hussein," "caveman" and "camel jockey." And all this allegedly took place at a depot in Queens.

Judge Raymond Dearie wrote that George had shown "he was the victim of a persistent barrage of ethnically offensive comments that spiked following the 9/11 attacks on the World Trade Center as well as one serious physical assault." However, the Daily News reports that Dearie dismissed George's claim that the NYC Transit agency "retaliated against him for reporting the alleged abuse."

Now a jury will decided whether George was subject to a hostile work environment.