Bus Driver Runs Man Over In The Bronx, No Criminality Suspected

A bus driver hit a man last night in the Bronx neighborhood of Foxhurst, police said.

The 40-year-old victim stepped out into the road as the driver was pulling out of the Bx35 stop at E. 167th Street and Southern Boulevard at 10:50 p.m., and the bus's rear, passenger-side wheels struck the pedestrian, according to the NYPD. Paramedics drove the victim to Lincoln Medical Center, where police say he is in critical condition.

Asked if police will bring charges against the driver, an NYPD spokeswoman said it is unlikely.

"It doesn't look like anyone's pursuing anything with that," she said. 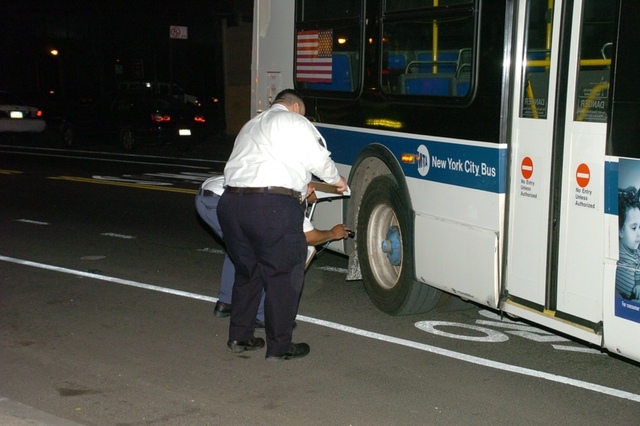 The man was struck by the bus's rear wheels. (David Torres)

The MTA will conduct its own review of the crash, a spokesman for the agency said; the driver's safety record was not immediately available.

Recent instances of police charging bus drivers for killing pedestrians under a new law that carries a $250 penalty have prompted outcry from the Transport Workers Union, which represents the drivers.

The latest crash happened fewer than four hours after activists say they completed a mural commemorating 264 people killed in collisions in 2014.

#Bx35
#MTA
#pedestrian safety
#vision zero
Do you know the scoop? Comment below or Send us a Tip