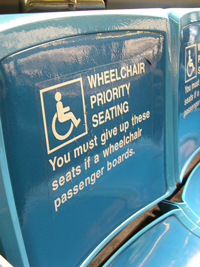 A Queens bus driver got into a brawl on his bus with a 22-year-old passenger after the younger man refused to surrender his seat at the front of the bus to an elderly woman with a cane. The New York Post reports that Larry Woods, who is 44, smashed passenger Christian Custis over the head with the bus's onboard phone after the man half his age wouldn't get out of a seat marked reserved for the handicapped when an elderly woman with a cane boarded the bus at 164th St. and Hillside Ave. in Jamaica, Queens yesterday Friday morning.

The phone clobbering ignited the brawl between the two men, who fought in front of a busload of passengers. Both were eventually taken to Mary Immaculate Hospital before heading to the 103rd precinct house. The ill-mannered and short-tempered men, Custis and Woods, respectively, were both arraigned on charges of assault and harrassment. Woods was also charged with possession of a weapon: his bus's phone.