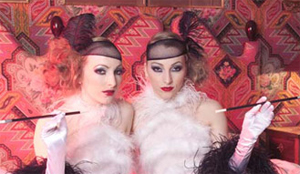 Scandal has once again ensnared The Box, that decadent burlesque nightclub where the elite gather to enjoy diversions like ''toss a ring on rods stuck up the lady’s orifices." Yesterday self-described "fetish-burlesque" performers Amber and Heather Langley, a.k.a. the Porcelain Twinz (pictured), posted a long, 5,085 word jeremiad on their MySpace blog condemning club owner Simon Hammerstein for sexual harassment, unsafe working conditions, debauched drug use, and leaving his Labrador behind to defecate "all over" the filthy, rat-infested green room. (He allegedly blamed that one on one of the performers.)

The Twinz, whose most celebrated routine is called "Twincest," have quit working there and say the entire tech crew joined them in resigning in July. Their allegations are pretty sordid, and include:

The description of the sex scene is quite graphic, and makes clear they weren't physically "forced" but felt coerced by their powerful, uncircumcised employer. (In whose loft they'd been renting a room.) They say they plan to file a lawsuit, and they're currently "under the supervised care of our naturopathic doctor with weekly visits as she monitors our health because our bodies are in such a state of over-exhaustion." [Via Grub Street]

#harassment
#lawsuit
#myspace
#performers
#simon hammerstein
#sued
#the box
Do you know the scoop? Comment below or Send us a Tip