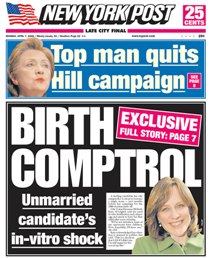 City Councilwoman Melinda Katz (D-Queens) broke news of her pregnancy to the Post today. And she landed on the cover because she conceived via in vitro fertilization, she's single, and she is running for City Comptroller next year!

"This is a decision that I felt if I didn't do, I would regret for the rest of my life," said Katz, who acknowledged her situation is unusual in politics.

"I did this purely through modern technology. It was done in a doctor's office. It was done at my wish and my desire."

Katz has kept her pregnancy a secret, confiding only in such people as her rabbi.

She added, "If I'm not mistaken, most of my opponents have children. Now, hopefully, I'll have one. This is a very personal decision that I made, and it's a life decision, not a political decision."

A former member of the State Assembly, Katz is on the Chair of the City Council's Land Use Committee. (And last week she voted against congestion pricing.) She represents the 29th District, which includes Forest Hills, Rego Park, Kew Gardens; parts of Maspeth, Richmond, Elmhurst.

#city comptroller
#City Council
#election 2009
#in-vitro
#Melinda Katz
#pregnancy
Do you know the scoop? Comment below or Send us a Tip