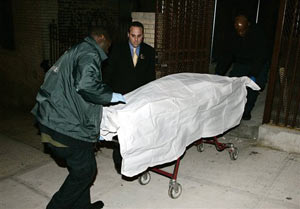 Miguel Matias called 911 yesterday morning to confess to police that he had strangled his daughter. He lied, however, about where he placed her body. The 34-year-old building superintendent told cops that he killed the 14-year-old girl because she wouldn't stop texting or instant messaging a boy, and that he then dumped her body in the woods. When police searched the Bronx building where he worked, however, they found the partially burned body of a girl shoved into the building's basement boiler.

The victim's parents were separated, and she lived in Pennsylvania with her mother and two sisters. She was only visiting her father in New York City. Astoundingly, Miguel Matias still had visitation rights to see his children, despite a history of mental problems. Matias was institutionalized at one point after he attempted to set fire to a car in Pennsylvania, while his children were inside it.

The medical examiner is conducting an autopsy on the 14-year-old to determine the exact cause of death. Police commissioner Ray Kelly said that at this time, it was impossible to determine whether the victim was actually dead or alive when her father pushed her into the boiler.