A two-story townhouse on a block of Tompkins Avenue in Bedford-Stuyvesant that is almost entirely a construction site partially collapsed on Monday evening, according to a neighbor who watched the whole thing from his third-story window.

"I just heard cracking wood sounds and I looked out the window and the wall collapsed, and the roof collapsed on top of it," Jered Stuffco said.

He said the debris the cave-in kicked up almost inundated his apartment.

"I saw the dust cloud coming and shut the windows," he said.

Firefighters showed up within two and a half minutes, according to the Fire Department. No one was injured, the FDNY said, but Stuffco thinks that had the front of the building collapsed, it would be a different story. Stuffco said that work with heavy machinery began on the buildings near the corner of Tompkins and Hancock Street, a few weeks ago, and that entire side of the block between Halsey and Hancock streets has become a construction area since he moved in last December, with the exception of one vacant building and one housing a veterinary clinic. A former paint store at the corner of Halsey is in the process of becoming a four-story residential building, he said. 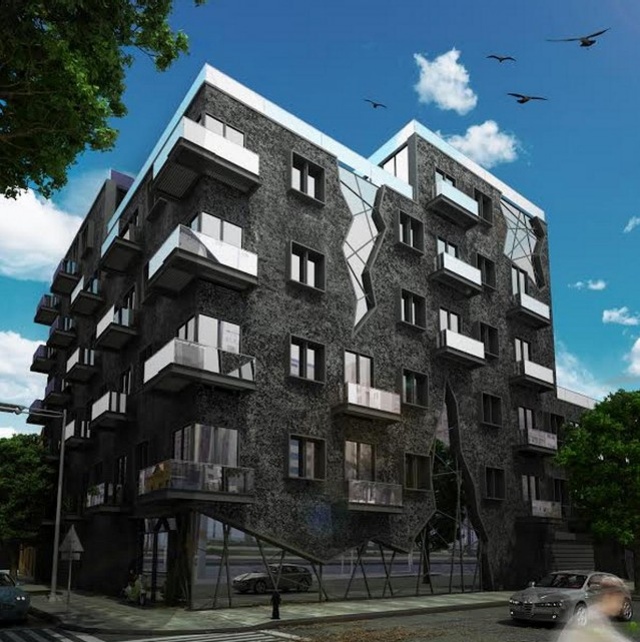 Developer Vasco Ventures reportedly bought four properties—including the collapsed building, two other townhouses, and a vacant lot—last year and is planning to turn them into a six-story, 35-apartment complex called Hancock Manor.

"Before Bed-Stuy started getting red hot, we realized where it was going,” Vasco Ventures head Ephraim Vashovsky told Multi Housing News in December. "But the market is getting flushed out, properties have nearly tripled in price over the past few years, and we're giving residents—primarily young business people—the option to live in the area without buying."

The Department of Buildings has issued a stop-work order at the property, and a spokesman said that the collapse was caused by failure to brace a 20-foot-by-8-foot second-floor wall during the tear-down work.

A woman who answered the phone at Vasco Ventures said no one was immediately available to comment.

Stuffco said that on Sunday, around the corner on Throop Avenue between Gates Avenue and Quincy Street, police taped off the sidewalk after bricks fell from the front of a four-story building, dangerously close to pedestrians. That building, at 437 Throop, is vacant and being gut-renovated. The owner, obscured through multiple layers of LLCs, was hit with a stop-work order on Sunday when part of the facade collapsed, cited for safety violations, and ordered to build a sidewalk shed. Building inspectors ticketed the owner again today for continuing work in violation of the earlier order. Stuffco's takeaway is simple:

"Maybe people should watch out if they see a green fence. Maybe walk on the other side of the street because you never know when something is going to collapse."

#Bedford-Stuyvesant
#building collapse
#construction safety
#gentrification
#Hancock Manor
#Vasco Ventures
Do you know the scoop? Comment below or Send us a Tip