Build Up To A Raid: NYPD Planned Occupy Wall Street Eviction For Weeks

The NYPD planned Monday night's raid of Zuccotti Park for weeks, starting soon after its first attempt to clear the park failed in October. Only top brass knew the raid was coming and the officers involved—mostly rookies and borough task forces—were told Monday night that they were going to do a mobilization drill under the FDR, not evict a peaceful protest (so the Hipster Cop was telling the truth!).

As a police source told the Times: "The only people who were aware of them going into Zuccotti Park were at the very highest levels of the department." The first person who seems to have figured out what was happening? Uh, Questlove, natch.

Mayor Bloomberg and Ray Kelly chose 1 a.m. as the time to start the raid because Kelly felt "it was appropriate to do it when the smallest number of people were in the park." He chose late Monday night because apparently Tuesdays and Wednesdays are the days when the most cops are on duty—in case something terrible happened. Not to mention the fact that Bloomberg, worried about his reputation, didn't want to risk further embarrassment with OWS threatening to shut down the NYSE on Thursday. 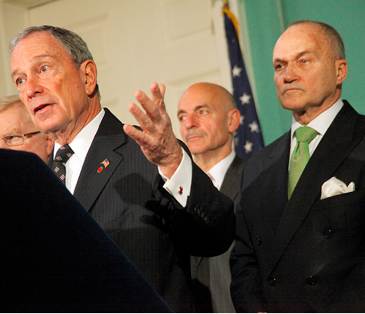 Kelly and Bloomberg also specifically kept the whole thing under wraps to prevent a repeat performance of their first stab, in which advance warning of the raid gave protesters and the media ample time to collect themselves for a hard slog with lots of media attention.

To get the ball rolling this time, hundreds of NYPD officers about to finish up on Monday night were suddenly told their shifts had been extended. "They thought they were going home and were as surprised as anyone when they got the word that they had a new assignment," a police official told DNAinfo.

Cops from across the city were sent with their "hats and bats" (or, helmets and batons) down to Pike Slip and the FDR, near the Manhattan Bridge, before moving out. Or, in the words of Questlove, "Omg, drivin down south st near #ows. Somethin bout to go down yo, swear I counted 1000 riot gear cops bout to pull sneak attack #carefulyall"

In the build up to the raid, the NYPD wasn't just planning the right time and method to strike, they also ran a number of large-scale drills with an eye towards Zuccotti and carefully monitored how Occupy protests were dismantled in other cities (apparently there was a telephone conference with 18 mayors of occupied cities, though a Bloomberg spokesman says he was not on the call). Further, "Officials increased so-called disorder training—counterterrorism measures that involve moving large numbers of police officers quickly—to focus on Lower Manhattan." Practice makes perfect, after all?

Once the cops had collected and received their orders they headed to the park with their loudspeakers, klieg lights and threatening demeanors. And, well, then this happened.

#manhattan
#nypd
#occupy wall street
#ows
#Questlove
#Zuccotti Park
Do you know the scoop? Comment below or Send us a Tip