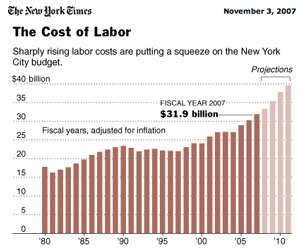 Mayor Bloomberg has made a big deal out of municipal belt tightening--stressing that the flush budgetary times funded by Wall St. bonuses and record real estate transaction fees can not last forever. Earlier this year, the mayor sent out a memo to the heads of city agencies that emphasized that flush times should not be taken for granted:

As you are aware, the City's economy depends in no small measure on the profitability and success of Wall Street and the financial services industry. Recent events in the financial markets are, therefore, a subject of deep concern. Capital market losses mean fewer tax revenues for our budget and fiscal plan. A slower real estate market means fewer transaction tax revenues – again, hurting our bottom line.

Now The New York Times is reporting that the deals the Mayor has made with city unions may have hamstrung city budgets long after the billionaire politician has left office. Basically, these generous pay raises to unions including the police sergeants', sanitation workers', and police detectives, will lead to "expenses that stand to outpace revenue, especially toward the end of the city’s four-year spending plan."

Contracts like those as well as ones with city teachers (that boosted pay 40%) and with FDNY brass, may have left the city in the lurch long after the mayor's left office. Some critics are concerned, suggesting that the costs may force downsizing in the future, but Deputy Mayor Ed Skyler said, "You have to deal with these expenses whether you put them in the financial plan now or later. Not including them at this point would be burying your head in the sand.”

The historical parallels to Mayor John Lindsay are worth mentioning. Lindsay was a Rockefeller Republican from the Upper East Side, much like Mayor Bloomberg. His negotiations with the city's public unions wound up being calamitous to the fiscal state of New York. The aftermath led to the city verging on the brink of bankruptcy and the turmoil of 1977.