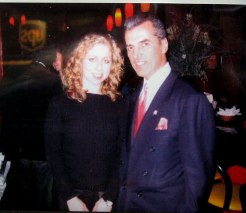 Former President Bill Clinton may love to eat foods like osso bucco, but he's not so happy with the restaurant Osso Buco. Clinton's lawyer sent owner Nino Selimaj a letter demanding that a photograph of Selimaj and Chelsea Clinton, which had been featured in the University Place location's window, be taken down.

The AP reported that lawyer Douglas J. Band (apparently using letterhead from "the office of William Jefferson Clinton") noted the young Clinton's status as a private citizen, the fact she "was not consulted prior to this picture being displayed," and that the photograph does not serve as an endorsement." Band also wrote, "We reserve the right to exercise any and all options available to us if you refuse to comply."

Selimaj took down the photo and told Page Six, "I am really heartbroken. Until this morning, I would have voted for Hillary. Bill was my favorite president of all time... I really hope they will reconsider." Hmm, since Barack Obama is in NYC tomorrow, maybe he'll consider having an event at Osso Buco.

1010WINS took a picture of the photograph before it was taken down.