Bryant Park to Get Even More Mobbed 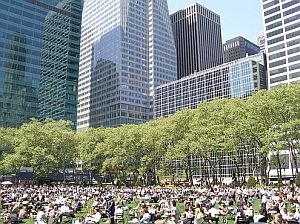 Bryant Park is Manhattan’s most packed park, and there’s considerable hand-wringing going on about the new office buildings rising nearby, which will further glut the urban oasis with more than 10,000 new office workers.

Maxine Teitler of Community Board 5 says “the city” is to blame, telling the Times that Manhattan “doesn’t have a lot of green space, and the city keeps giving permits to build enormous buildings that are putting pressure on all of New York’s infrastructure, especially the parks.” But Parks Commissioner Adrian Benepe says it’s just that the park is “a victim of its own success, since decades ago nobody went to Bryant Park unless you were looking to buy drugs.”

Now they’re looking to score free Wi-Fi, which had gotten so sluggish under the strain of an average 500 peak-time users that the Bryant Park Corporation [BPC] spent $10,000 to upgrade it. They’re also bracing for the influx by putting out at least 500 new chairs, 100 new tables, and possibly more bathrooms because the lines are getting long during peak hours.

BPC chairman Daniel Biederman contends that “no other public park in the world is as densely populated,” with Bryant Park packing in over 1,000 bodies per acre – and that’s not even close to how mobbed it gets when HBO screens movies in the summer (starting June 16th with Dr. No!) – and your knees are in your chest. And look out for an even crazier lunch hour mob scene today because Wachovia is in the park setting up one of those “Money Booths” where contestants try to grab as much cash as they can.