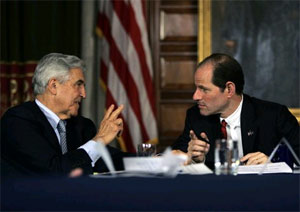 What a way to mark the middle of Governor Eliot Spitzer's first year in office: He has forwarded information about Senate Majority Leader Joseph Bruno's statecraft and police escort use to Attorney General Andrew Cuomo and Albany DA Daniel Soares. That's quite a steamroll! But the story is totally, almost deliciously insane. If you've been trying to ignore the dysfunction of Albany, we urge you to stop - this is too good.

Over the weekend, the TImes Union revealed that Spitzer had been looking into Bruno's travels - specifically how the Republican may have used state helicopters to go to Manhattan political fund-raisers. Bruno also used state police drivers to take him from airports and helipads to the city. During a press conference, Bruno said his life has been threatened, hence the police escorts, but apparently a "formal threat assessment" was never made. The NY Times does detail some of Bruno's press conference, including how a "deranged" man was outside his office, trying to get in to kill him, and how he was told not to open his mail.

But the Governor's office fired back. From the Times Union:

Spitzer spokesman Darren Dopp said Bruno's requests for police escorts were in New York City, not the Capitol Region. Dopp also said Bruno has a "standing request" that police be allowed to use their sirens and emergency lights when they drive him in New York City to speed his progress through traffic.

"Numerous times he requests lights and sirens and we say no," Dopp said, explaining that even the governor doesn't get such escorts.

"He wanted to get around New York City as quickly as possible," Dopp said of the police requests, even though the Senate majority has its own cars and drivers based in the Big Apple.

Burn! We wonder if Mayor Bloomberg will get involved - he hates it when political officials use sirens.

Bruno also mentioned Spitzer allegedly threatened knock him out so hard he would never get up (it's hard to figure if it was a literal or figurative punch) prompting Bruno to say yesteday, "Now think about that, the governor of the Empire State saying that to a majority leader who is almost twice his age?' But Bruno ain't gonna fall over so easy. He said, "I grew up in the toughest part of Glens Falls, next to the boxcars, where kids would come up to you when you weighed 90 pounds and they weighed 120 and just punch you right in the mouth just because you were Italian, O.K., or just because you lived next to the boxcars, or just because they felt like it. That’s how I grew up, O.K.? So swing away.”

Photograph of Bruno and Spitzer last month by Mike Groll/AP